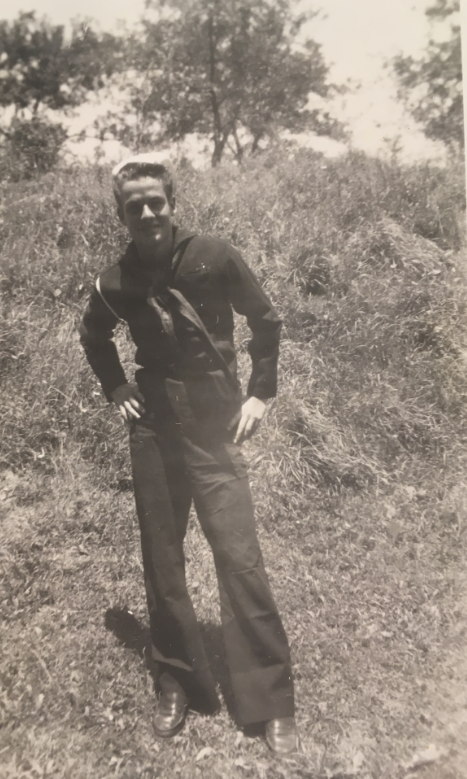 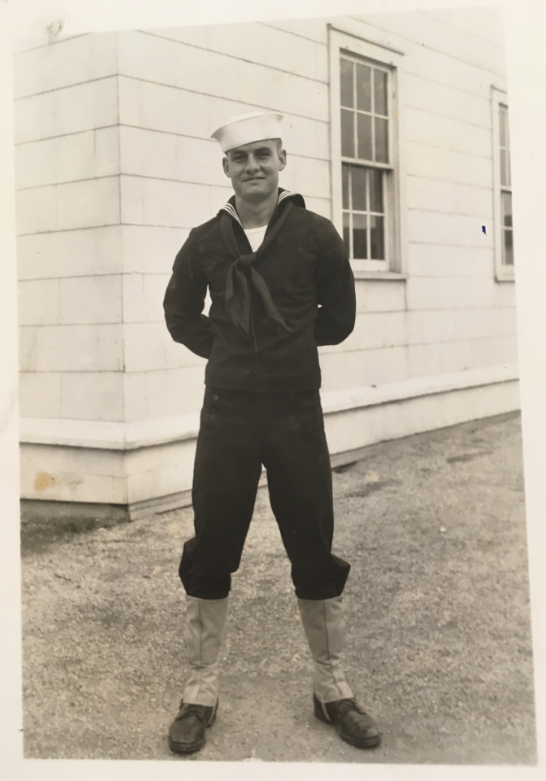 Jack enlisted in the Navy in 1948 at the age of eighteen, and served through 1951.  This picture was taken at Wakeen, Wisconsin when Jack graduated from boot camp. 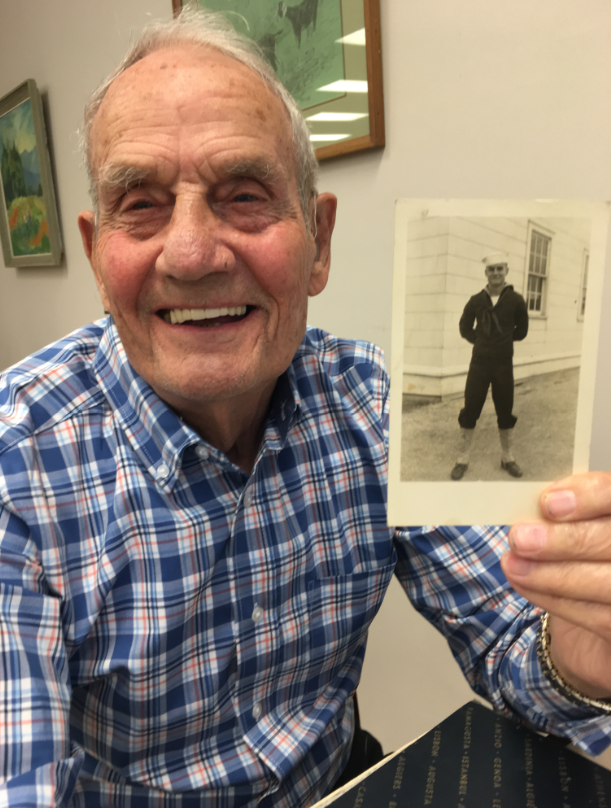 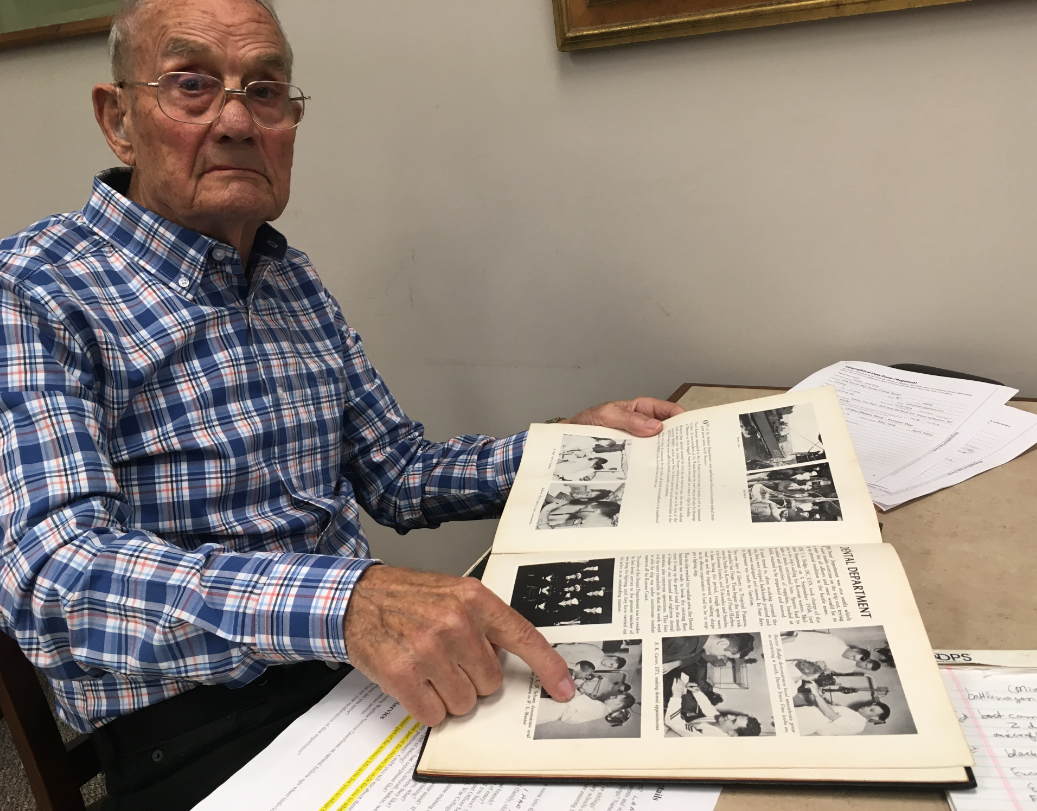 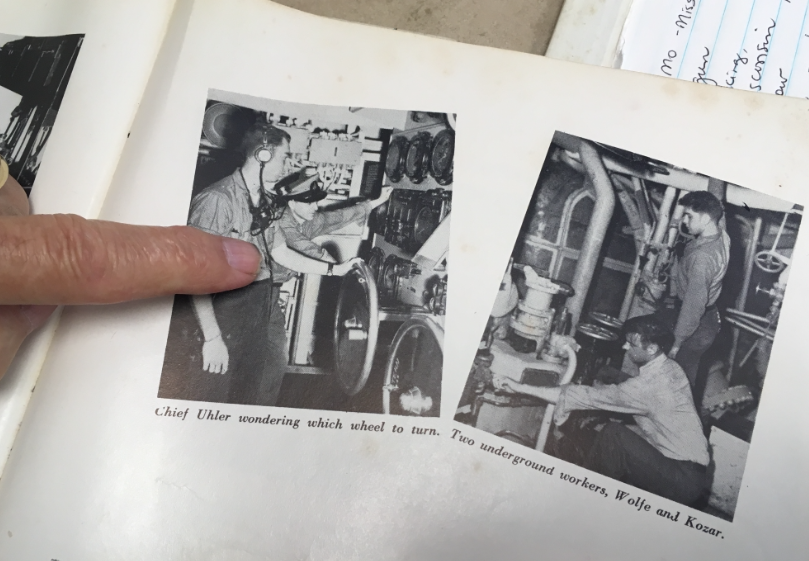 Here Jack points to the big wheels he had to turn while monitoring the ship's speed. 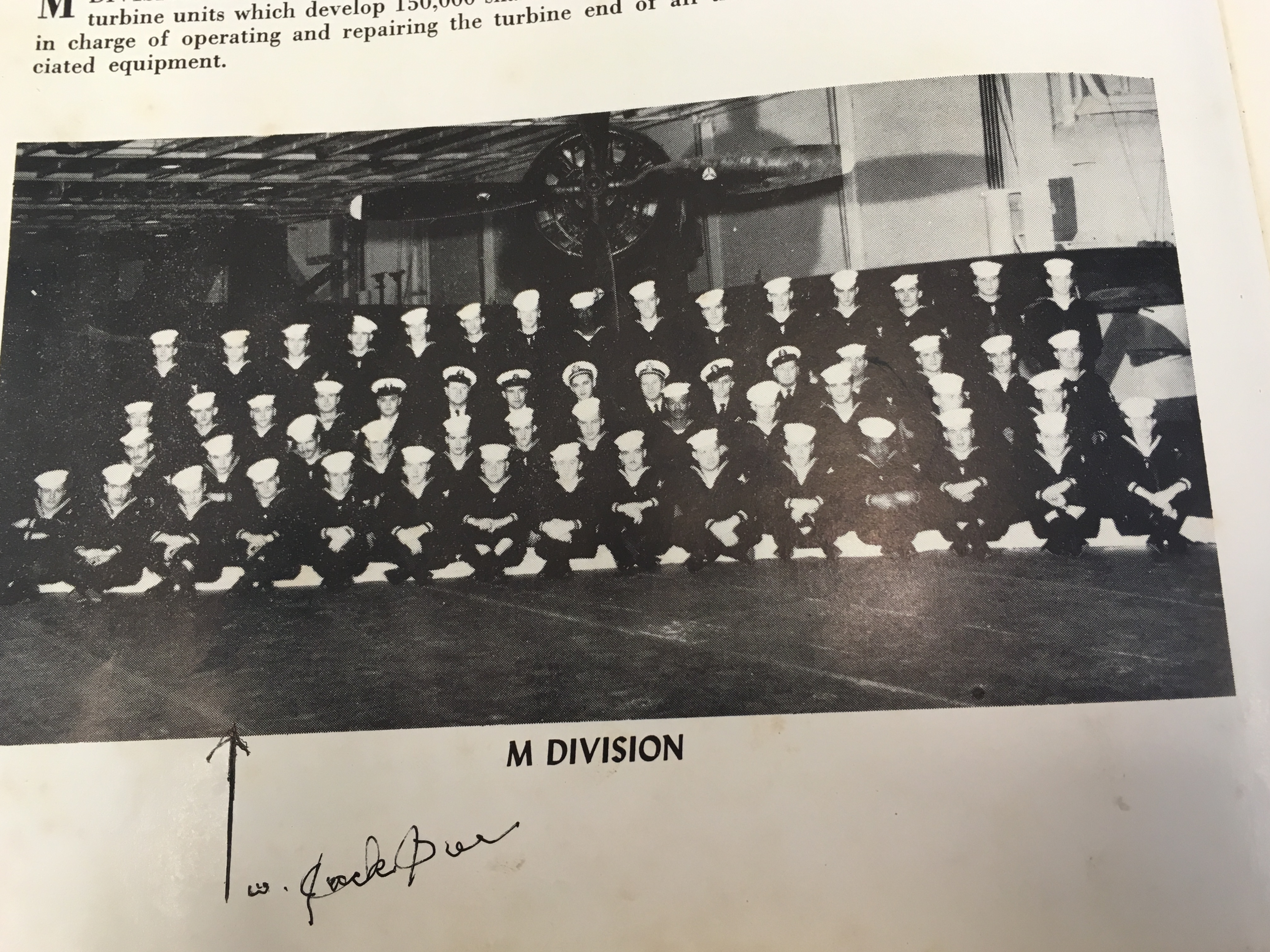 Jack is seated fourth from the left on the front row of his group.  He says that the men in his division became like brothers and were very close.  There were also fifty Marines on board to guard the captain and the ship's brig. 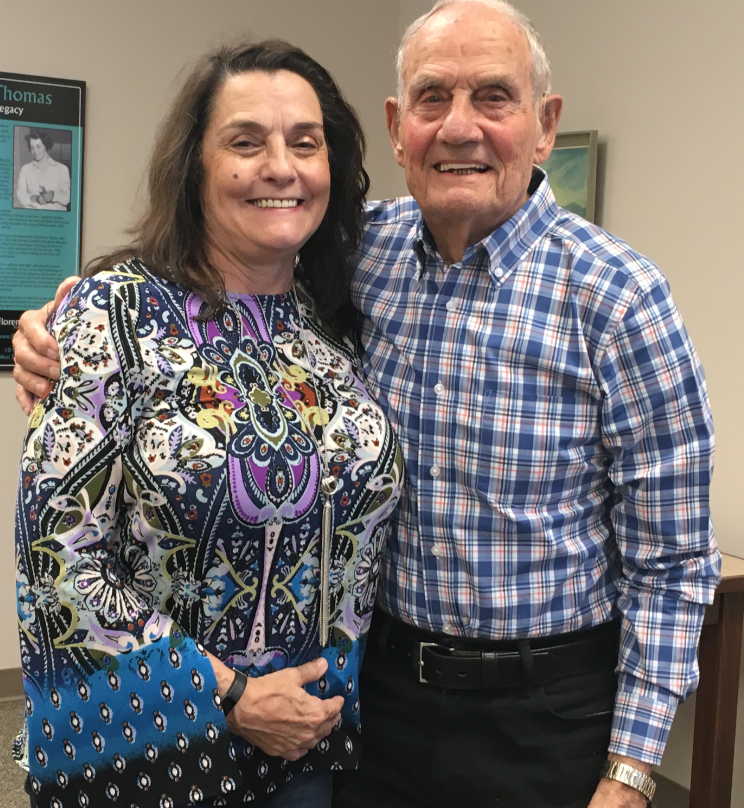 Walter Jack Poe was born in Lansing, North Carolina, on October 30, 1929, to Florence and Walter Wade Poe.  He graduated from Lansing High School.  Jack enlisted in the United States Navy on April 30, 1948, serving during the Korean War.  While in the Navy, he traveled the world.  His highest rank in the Navy was first class fireman. Jack had three brothers who also served in the Navy.  After his Navy career, Jack worked at Sprague Electric Company and retired with more than thirty years of dedicated service.  Jack currently lives in Lansing with his wife of sixty-seven years, June Riddle Poe. He has three daughters—Cathy Barr, Deborah Church, and Tina Poe—and four grandsons, Jeremy Robert Barr, Joseph Brandon Ashley, Daniel Jack Barr, and Luke Wade Poe.

Jack enlisted in the Navy in 1948 at the age of eighteen and served through 1951.

While home on leave, Jack went out with a friend and accidentally left his Navy credentials in the car.  When he got back to the Naval Base in Norfolk, Virginia, he was asked for his paperwork to be allowed back.  Of course without identification he was denied access, so he did the only thing he could: he hitchhiked from Norfolk, VA, to Lansing, NC, and back, to retrieve his credentials. When asked where he had been he replied "You don't want to know!"

Jack says that his service years taught him to "be on time, learn to get along, and if you have to bite the bullet .... bite it!"

There were many places Jack went while in the Navy: Europe, north of Europe, England, Scotland, France, and Ireland's Slane Castle. He says, "It was worth it because you learn so much from other countries and cultures."

Jack's main job at sea was working in the engine room, two decks below sea level.  He had to maintain the ship's speed to coincide with the speed of planes taking off and landing on the flight deck above.  He talked about the tension and fear of being in the engine room during battle.  "There were hatches that had to remain tightly closed.  These hatches remained under armed guard, not to be opened until cease fire, in order to protect the ship from sinking."

The Navy took command of the seas with Battlewagons.  These battleships are large armored warships with a main battery consisting of large caliber guns (18 inch barrels).  Jack's exposure to the deafening blast of these big guns left him with severe hearing loss.