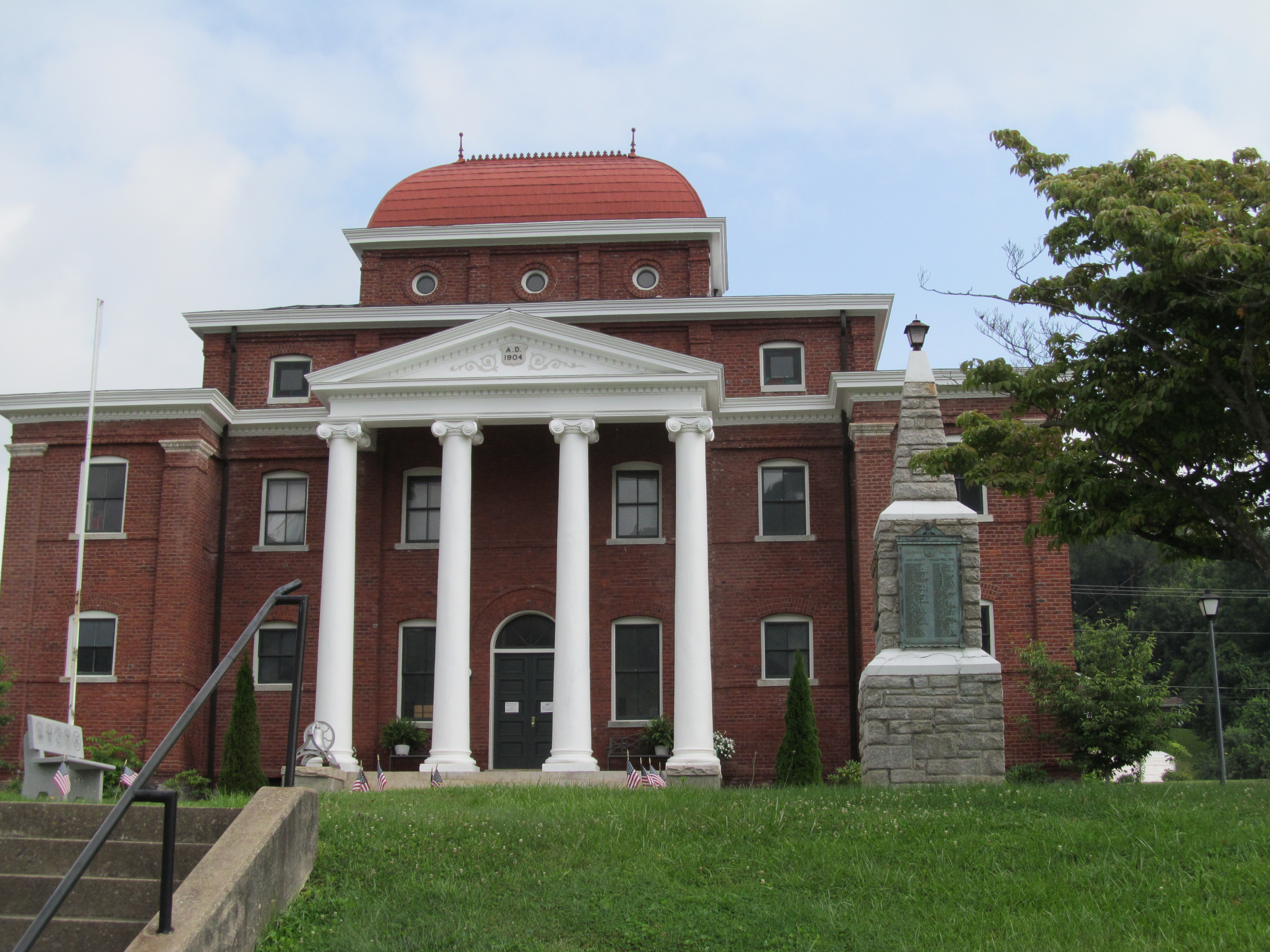 The old Ashe County Courthouse, with the 1949 Veterans Monument on the right and the granite bench on the left 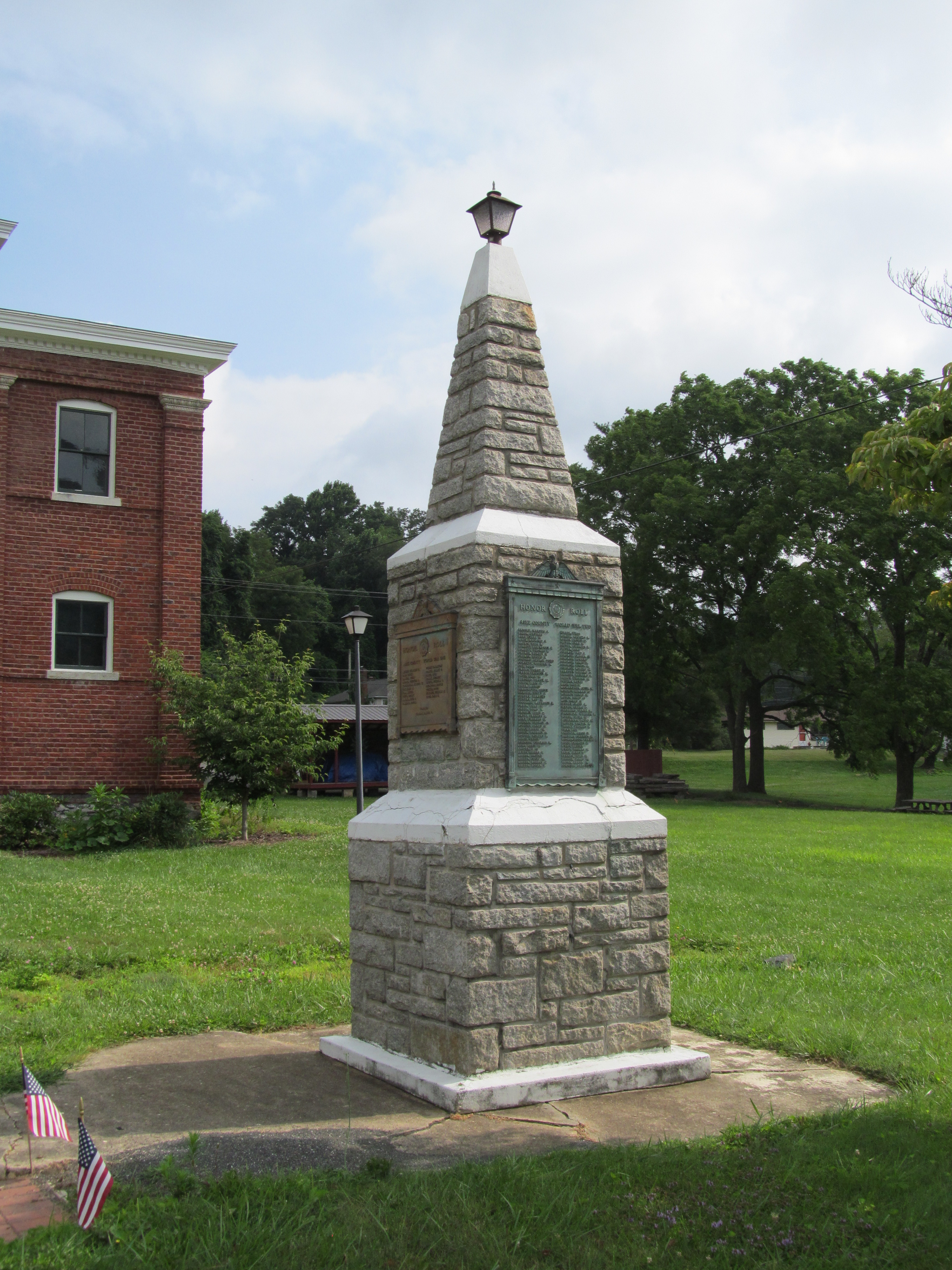 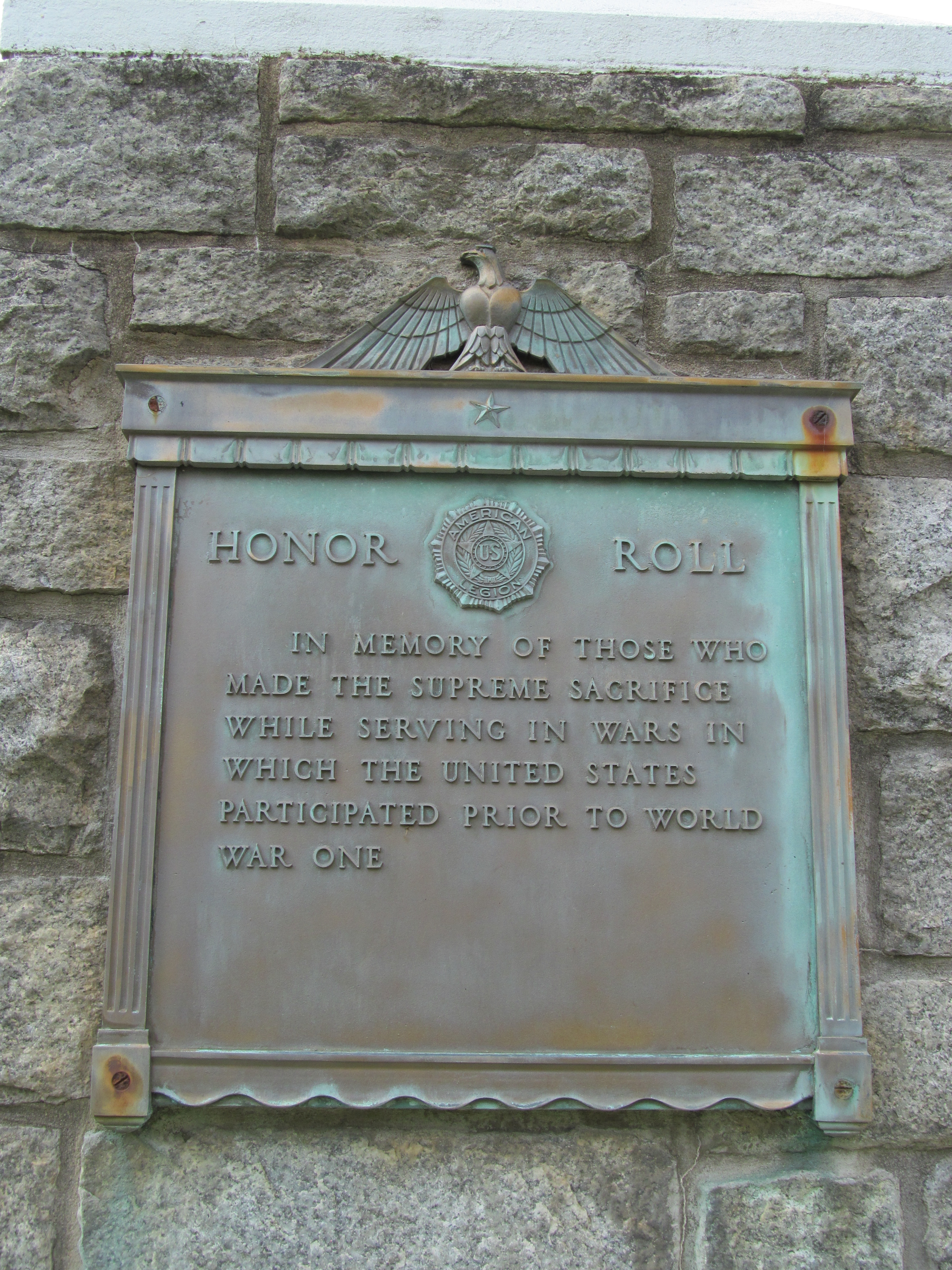 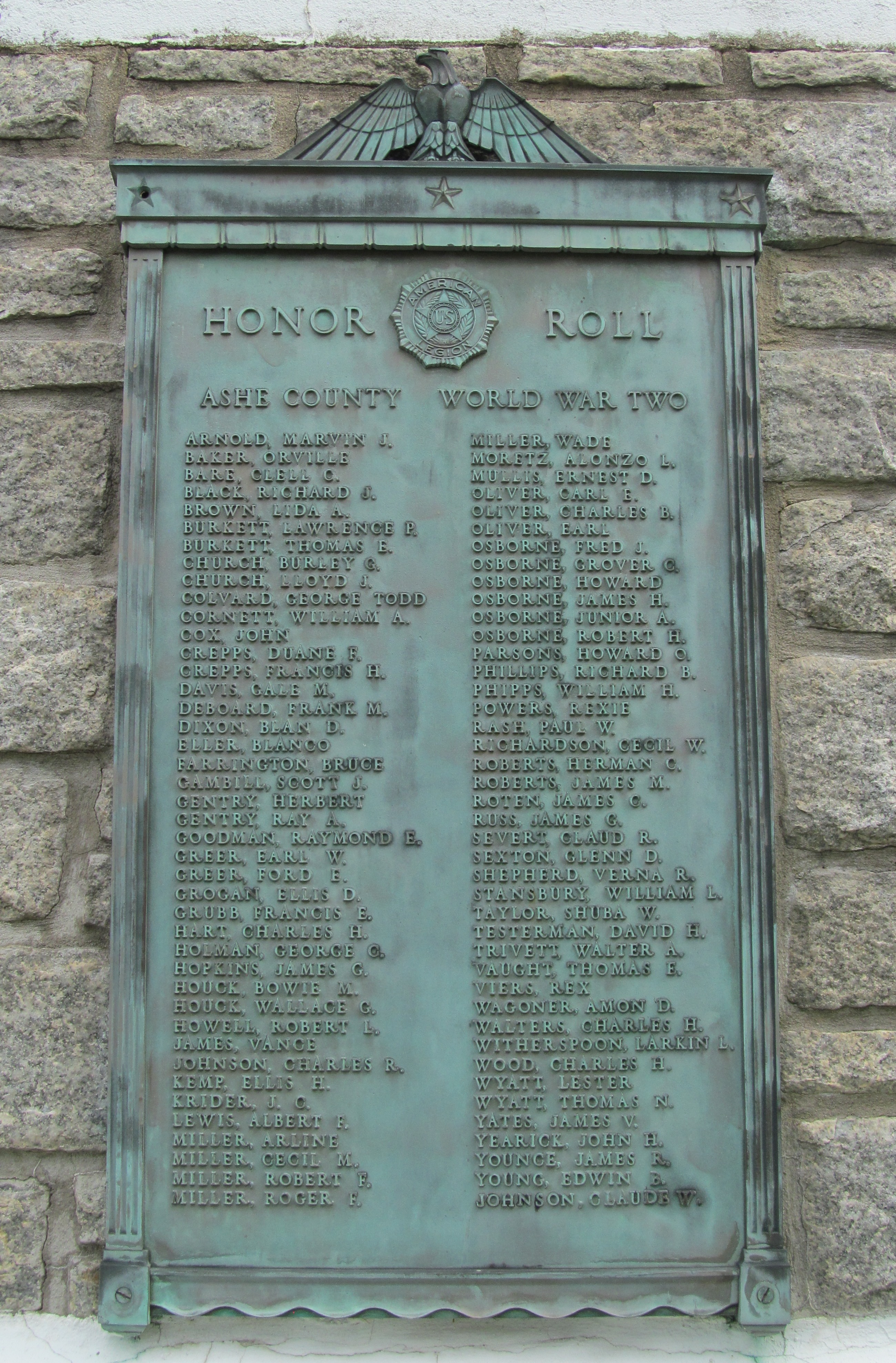 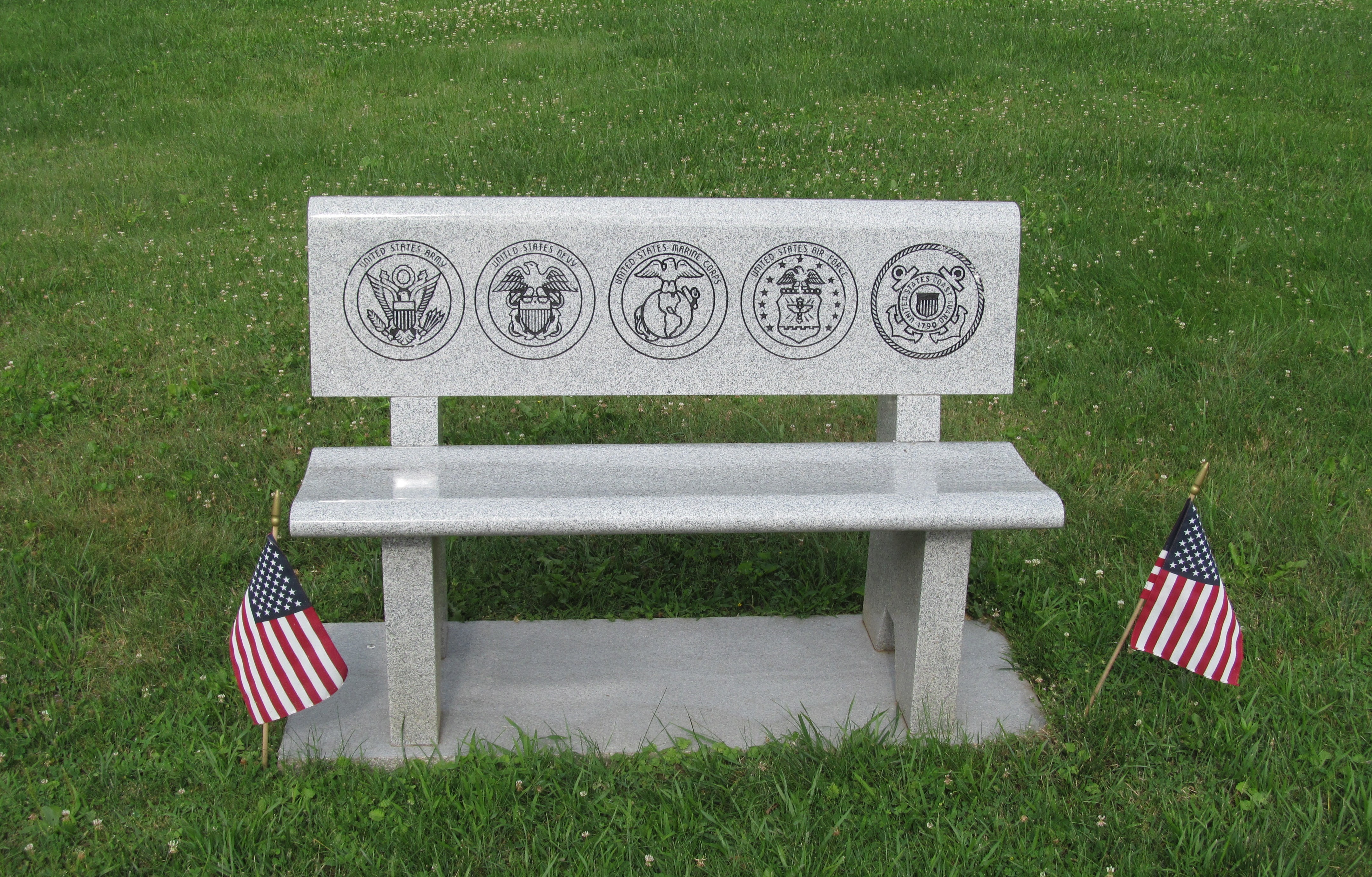 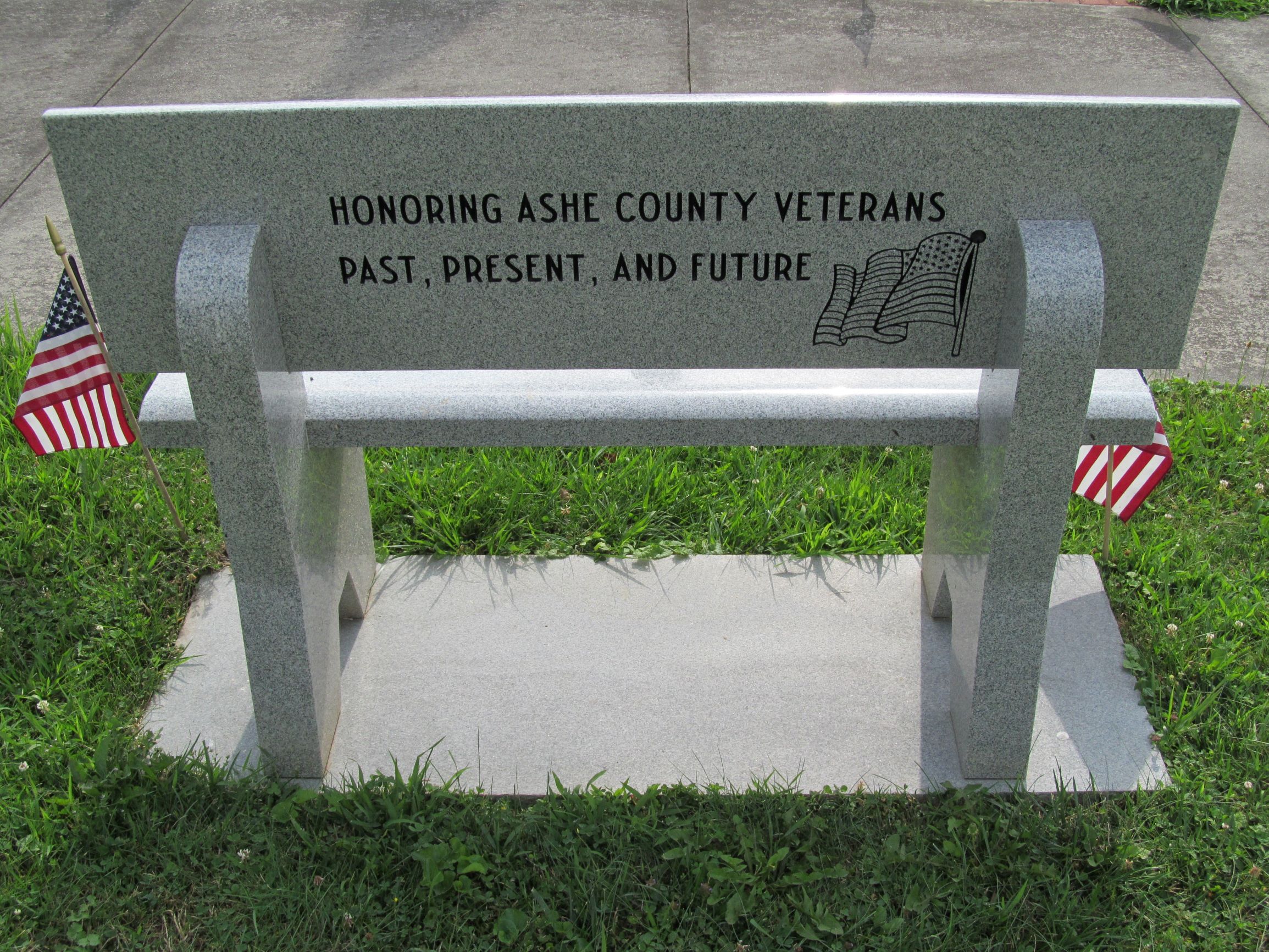 The back of the granite bench, inscribed with "Honoring Ashe County Veterans Past, Present, and Future" 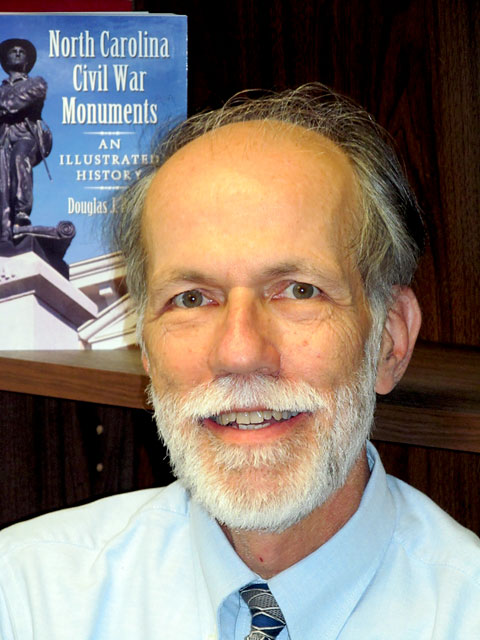 On Sunday, May 29, 1949, less than four years after the Japanese surrender ended World War II, more than 3,500 people—“One of the largest crowds ever assembled in Ashe County,” according to The Skyland Post—gathered for a Memorial Day service at the courthouse in Jefferson.  “Over 70 ex-servicemen from Ashe county (sic) and the West Jefferson high school band, in uniform, marched from the Jefferson high school to the courthouse,” where they led the crowd inside “to pay tribute to those who have died in past wars.”[1]

Reverend Hoyt Wood was the keynote speaker.  Alluding to sentiments expressed by President Abraham Lincoln 86 years earlier at Gettysburg, he emphasized “that, even though people will forget his speech and that the Memorial Day service had been held, that they shouldn’t forget those men that gave their lives for their country.”

Following Wood’s address, the crowd moved to the courthouse lawn, where, the Post relates, “crosses for each of the past wars” had been decorated with flowers by local Boy Scouts.  “Taps” was sounded, and three volleys were fired.  Then as “Gold star (sic) parents, members of the American Legion and auxiliary and hundreds of others looked on,” L. P. Colvard unveiled a granite monument affixed with three bronze plaques: one cast with the names of 20 World War I dead, another enumerating 84 killed during the Second World War, and a third, “In memory of those who made the supreme sacrifice while serving in wars in which the United States participated prior to World War I.”

Civic-space commemoration, as evidenced through this monument and its tablets, requires the forging of societal historical memory, choosing what to acknowledge—and sometimes what to “forget.”  In contrast with the rapid memorialization of its World War II dead, Ashe County, like nine of ten North Carolina mountain counties bordering Tennessee, did not erect sculptural commemoration specifically honoring Civil War veterans or the dead for more than a century, thereby avoiding public acknowledgement of a conflict that pitted neighbor against neighbor with violence against civilians by draft-dodgers and petty criminals, armed gangs that could not be contained by authorities.

During World War I, Ashe was again plagued with draft dodgers and deserters, many from outside the county.  While 536 local men served in the military, and the county’s desertion rate was less than one-third the state average, armed conflict between local officials and renegades resulted in the death of at least one deputized Ashe citizen.  In June 1918, despite advice from the state’s adjutant general to use force in restoring order, North Carolina Governor Thomas Bickett journeyed to Jefferson, where in a celebrated courthouse speech, he persuaded the outlaws to peacefully surrender and return to their military units.[2]

World War II, however, was broadly supported across the state; and in Ashe, 2440 men served.  Following the conflict, multiple American Legion posts and one Veterans of Foreign Wars chapter were established locally; Lansing Post #171 would lead the monument-building effort.[3]

The Skyland Post relates little about fundraising, and the whereabouts of Post #171’s records, a unit since disbanded, are unknown.  While memorial activities began shortly after the war, with the Legion’s Auxiliary holding a poppy sale in May 1946, one of the first references to funding a monument was in January 1949, when in the final paragraph of a front-page article, the Post states, “L. P. Colvard reported that a number of contributions had been made to the memorial fund and requested that all members solicit further aid.”[4]

Subsequent fundraising was not detailed by the newspaper, yet by May sufficient monies had been collected to erect an approximately 13-foot-tall modified obelisk of gray granite atop a concrete base.  “American Legion Is Planning War Dead Memorial Service,” headlined a May 19 Post article which listed Ashe’s “honored dead” from each World War before concluding, “The Legion is planning a memorial service and the graves of the honored dead are to be decorated.”[5]

The front-page banner headline of the weekly’s next issue read, “County-Wide Memorial Service To Be Held Sunday.”  Plans included a “Special Program [and] Parade,” sponsored by the “Legion Post,” and the “Special Unveiling of Memorial On Courthouse Lawn; Public Invited.”  A “special invitation” was “extended to the parents and wives of all of the honored war dead to attend,” and also urged “Ex-Service Men” to take part: “Wear a uniform if you have one otherwise wear civilian clothes."[6]

Showcasing the depth of Ashe County’s commemorative commitment, the monument unveiling was but one of two memorial activities conducted by the Legion and its Auxiliary that weekend.  “Poppy Day Is To Be Observed Here On Saturday,” headlined the paper’s second section above an article describing how American Legion Auxiliary team captains and volunteer workers “have been assigned different districts” in which to sell the flowers, “with the hope to see a poppy on every coat on Poppy Day.”

A vigorous plant that produces small red flowers, poppies were among the earliest vegetation to sprout across the barren soil of World War I battlefields and cemeteries, and for nearly three decades, artificial red poppies had held a central place in military memorialization.  The blooms were immortalized by Canadian physician Lt. Col. John McCrae in his 1915 poem, “In Flanders Fields” and became a worldwide symbol honoring both the war dead and surviving veterans.  Artificial poppies, first made of silk and later of paper by wounded servicemen, were sold by the American Legion Auxiliary beginning in 1921, becoming the group’s major fundraiser.  [7]

Twenty-one photographs of fallen servicemen filled more than half a page of the Post’s June 2nd issue.  The images and article, “Unusually Large Crowd At Memorial Service As Monument Is Unveiled,” detailed the dedication, described above, while a letter from “A citizen who was present” lauded the service and praised the high school band.[8]

Memorialization, however, is a dynamic process that waxes and wanes with public opinion.  Patriotic fervor following World War II was replaced a quarter-century later with a collective ennui, and sometimes hostility, toward the military during the Vietnam War.  Ashe County’s monument was vandalized; a metal logo of the American Legion—shown in early photos topping the granite shaft—was removed and never recovered, replaced with a lantern which remains today.[9]

Respect for the military and veterans returned later in the 20th century; a wall of honor installed inside the old courthouse, now the Museum of Ashe County History, lists the names of more than 3,000 local veterans, and in 2003, specific recognition of veterans of nine named conflicts—including the Civil War—was realized with the dedication of a $65,000 memorial at the new courthouse.

The 1949 monument is also receiving a facelift.  A plaza of brick pavers, with plans to inscribe some with donors’ names, fronts the monument, and in 2020 a granite bench adorned with symbols of five military branches on the front, and the words “Honoring Ashe County Veterans Past, Present, and Future” on the back, was installed.

Memorialization has been described as part of a conversation between generations, honoring slain and surviving veterans while revealing much about the citizens effecting commemoration.  Succeeding generations add voices to this evolving remembrance recalling, as proclaimed in front of the current Ashe County courthouse, that for nearly 250 years when “Our Country Called Our County Answered.”

Dr. Douglas Butler is a practicing physician and independent scholar.  He is the author of North Carolina Civil War Monuments: An Illustrated History (McFarland, 2013).  Additional information and photos can be found at www.northcarolinacivilwarmonuments.com.

[3] Text of World War II plaque, part of the Ashe County Veterans Memorial dedicated in 2003 in front of the new county courthouse in Jefferson, North Carolina.

[7] National Poppy Day, although not widely celebrated in the 21st century, is designated by Congress as the Friday before Memorial Day and is strongly promoted on the American Legion Auxiliary website as a fundraiser.  https://www.legion-aux.org/poppy, accessed July 24, 2021.