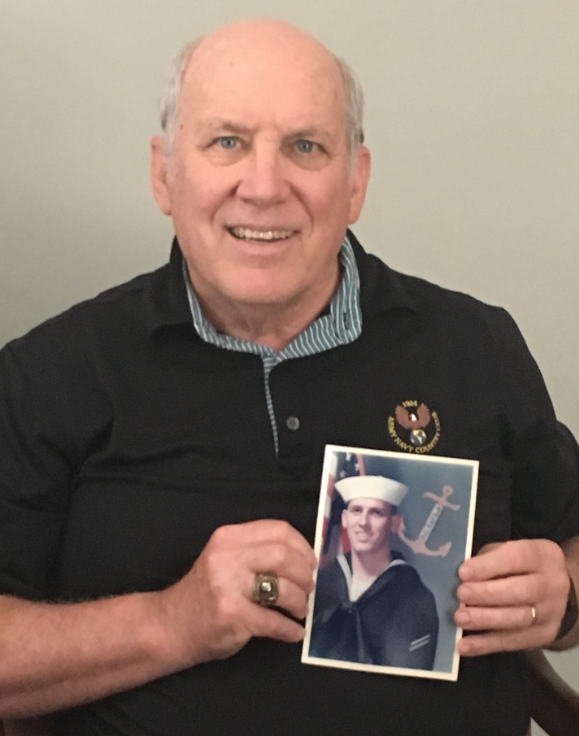 Doug Ehrhardt holding a copy of the picture that was taken when he was in Boot Camp at Great Lakes in 1970. 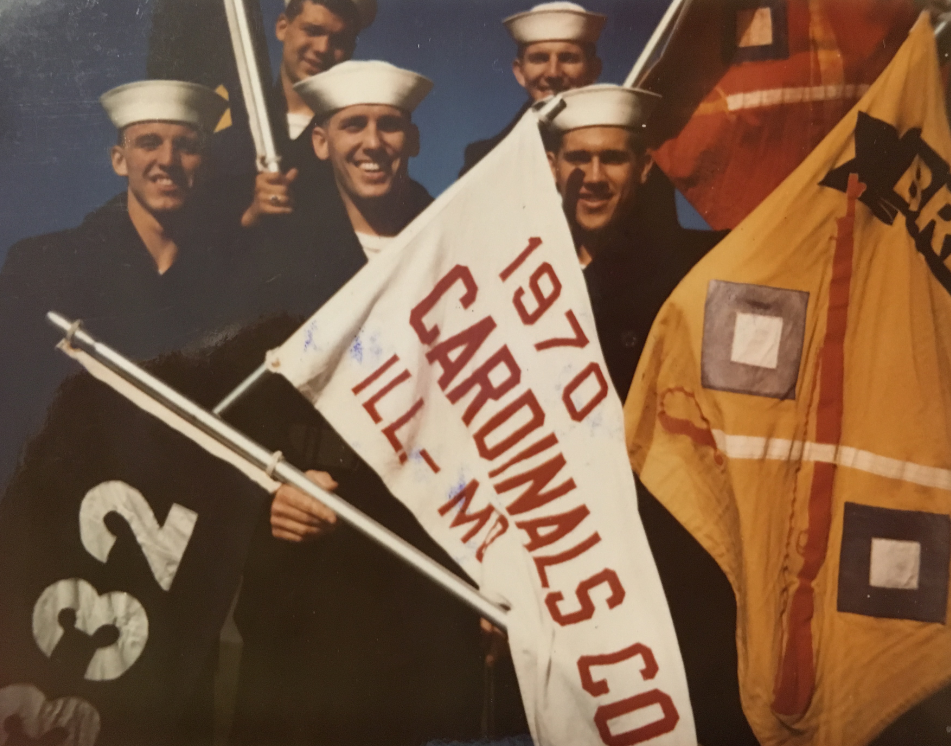 This picture came from a book provided to each recruit when they graduated from Boot Camp.  After wining all the drill flags during eleven weeks of training this group was slated to head to the fleet or to an “A” school. 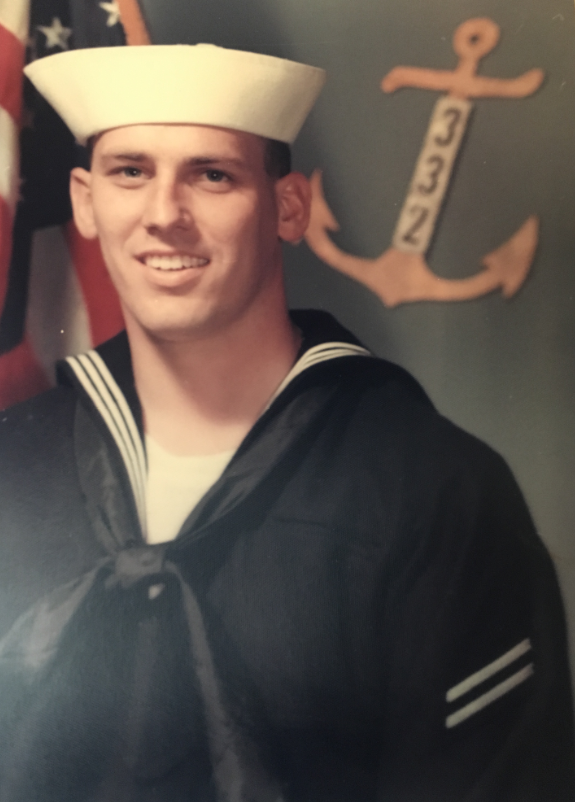 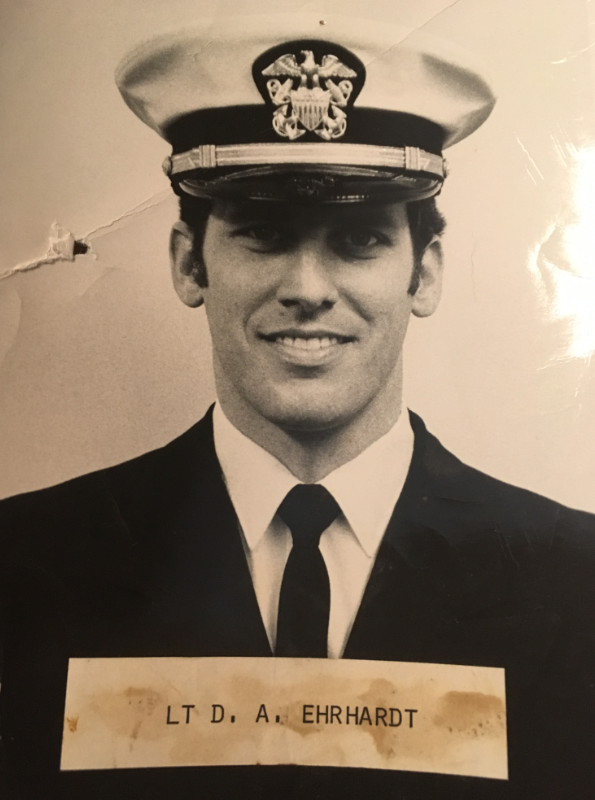 This photo was taken when Doug was first commissioned and stationed in Norfolk, VA, at the Environmental and Preventive Medicine Unit #2. 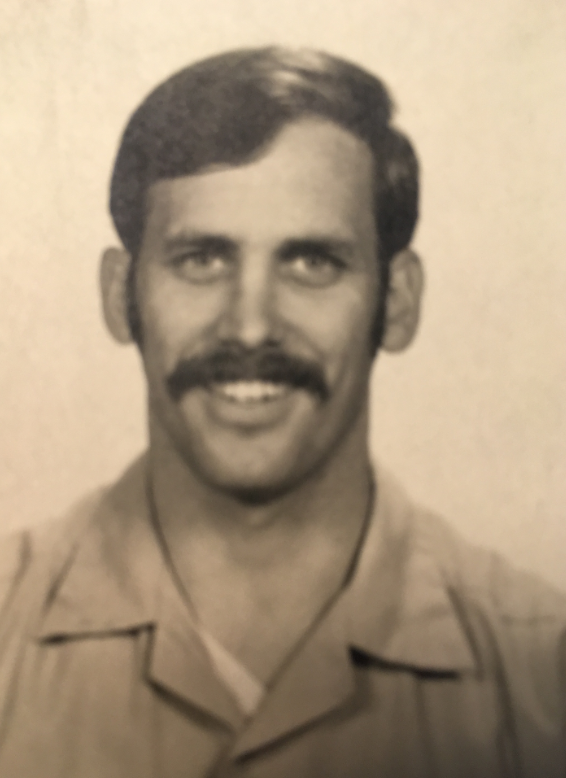 This picture is an early “official” photograph that was taken to have an official passport made when I was headed to an overseas tour in Okinawa…can’t believe that the mustache was still something that was permitted back in late 1975.  My working khakis didn’t have my rank or corps insignia as the policy was to not have them displayed in a passport photo. 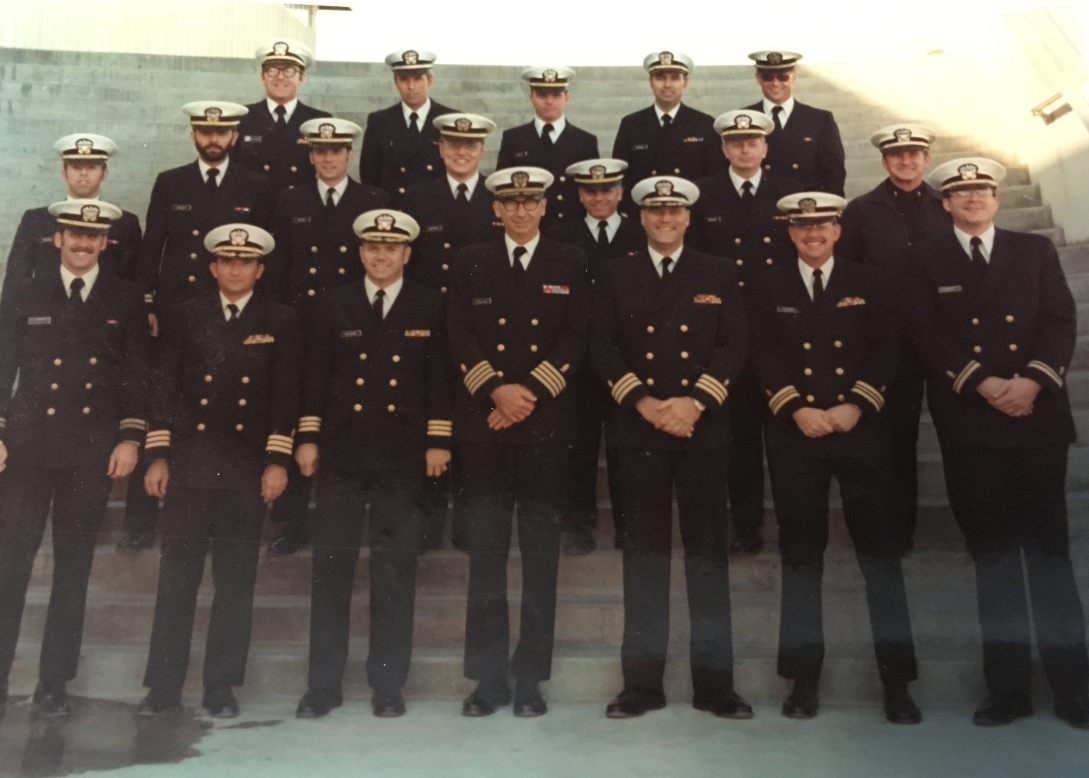 This photograph is of the first opportunity I had to attend a Tri-Service Military Entomology meeting in San Antonio, TX and was a group photo of many of my peers, mostly more senior officers as I was just a LT. 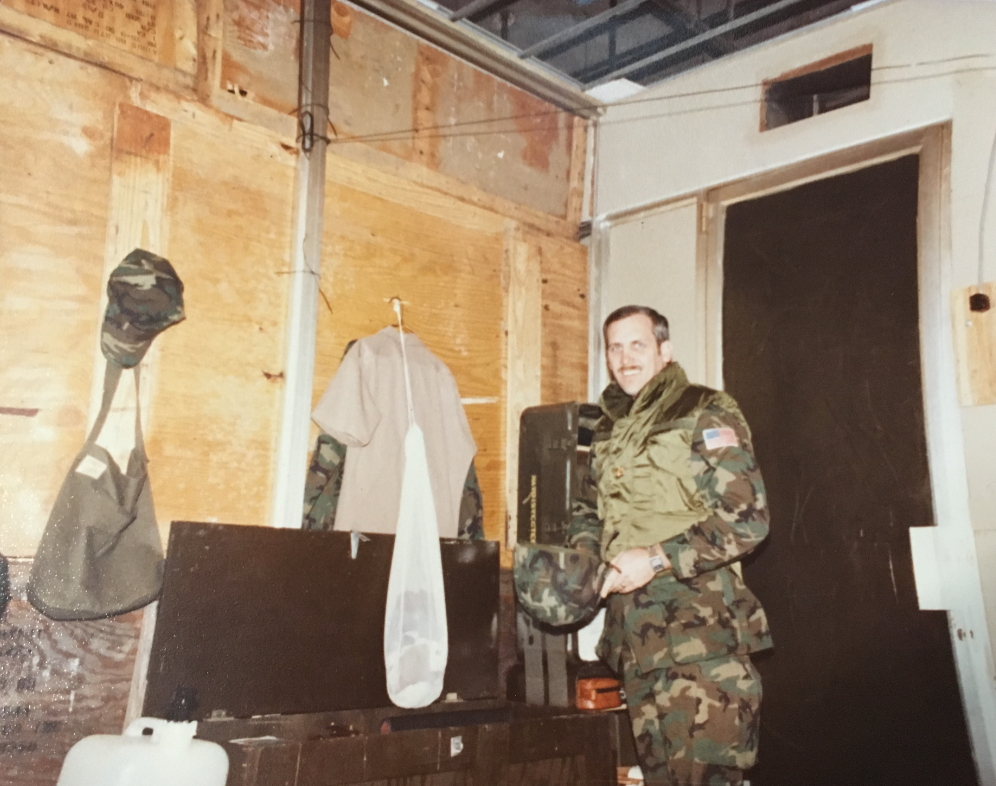 This picture shows my living quarters at the Beirut Airport where I lived for 6 months. 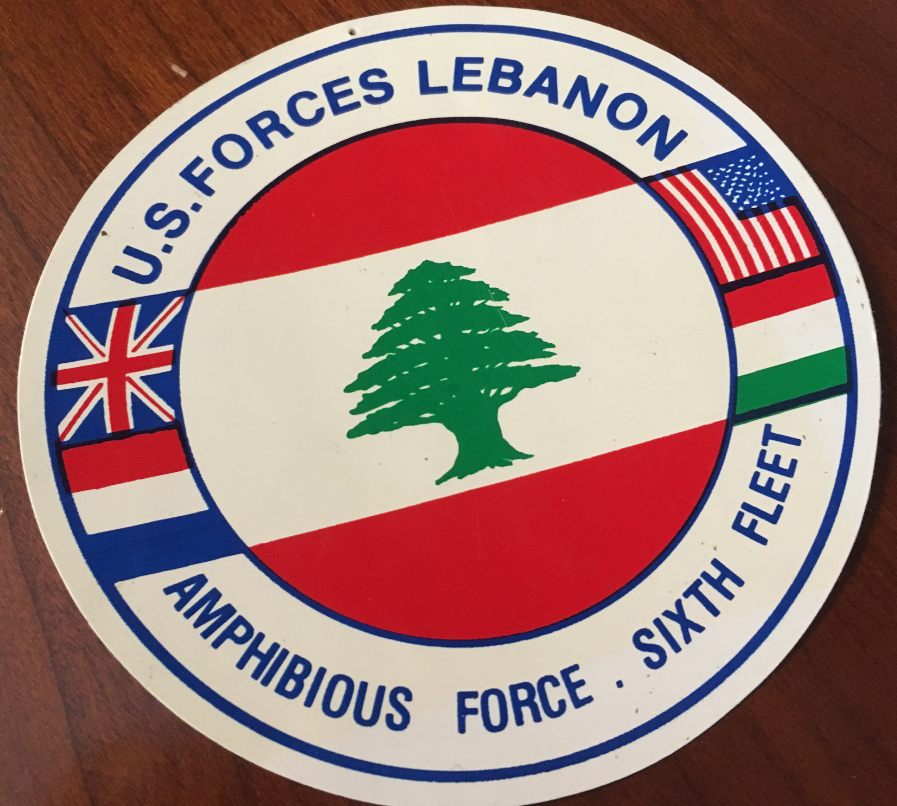 This is a US Marine Corps patch that was made to ID our effort as part of the 6th Fleet Amphibious Force. 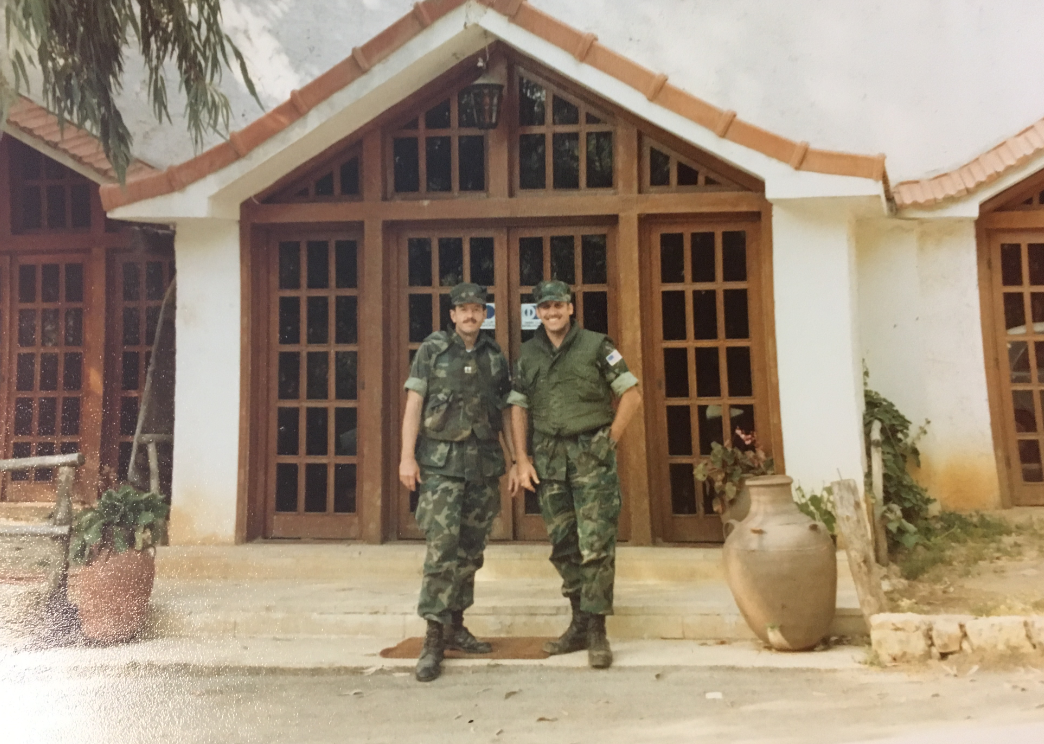 This picture is of myself and a medical department officer, assigned to do some off-base inspections. Our charge was to certify food production facilities that the MSSG started using about half way through the deployment to help reduce our use of MRE’s in our chow hall. 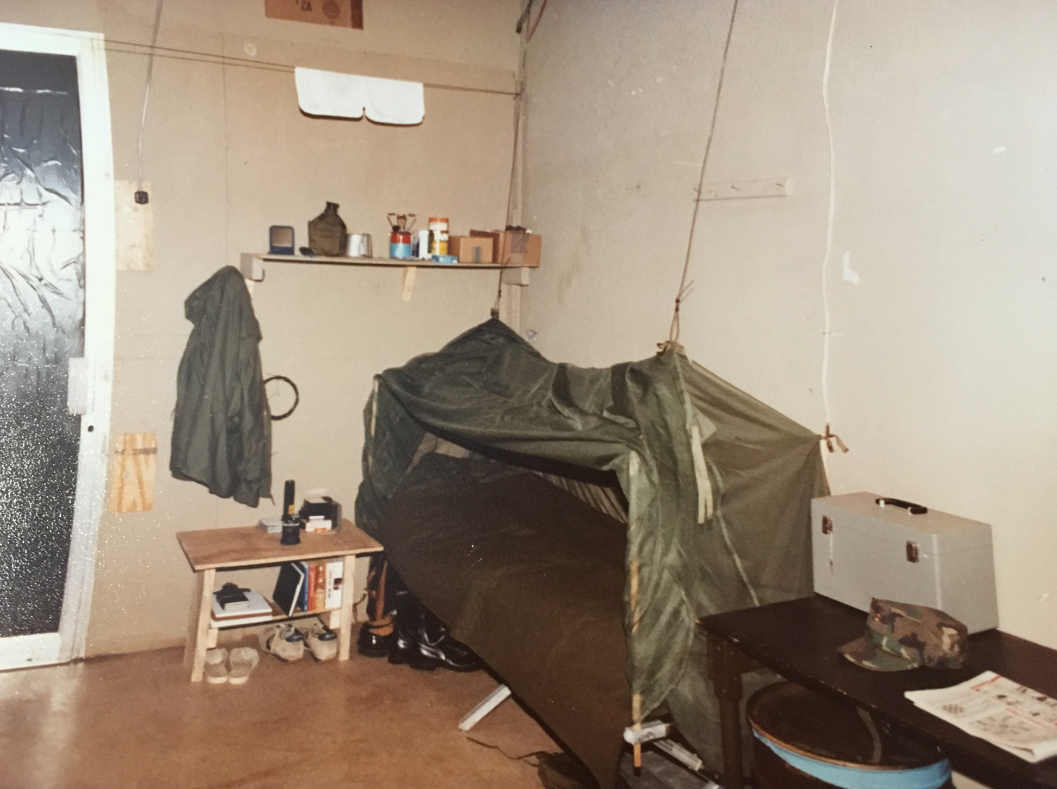 'Neat and tidy' living quarters while on temporary duty with the Marines in Beirut, Lebanon.  I had a room to myself for my quarters as I was a LCDR on that assignment, which meant I had the same rank as the CO of the MSSG. 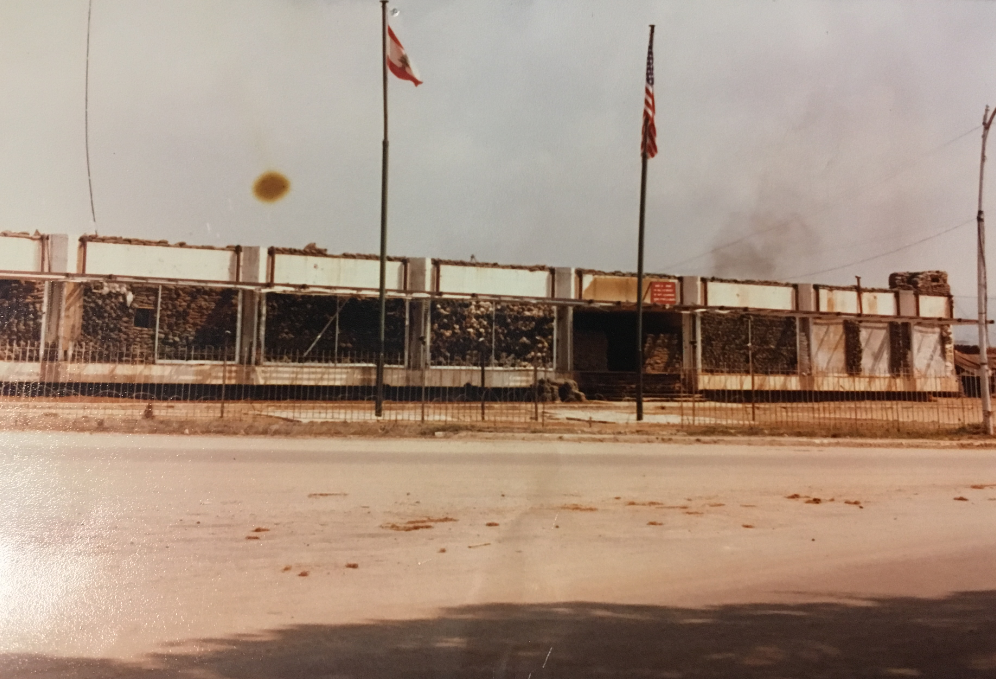 This building was reinforced with walls made from sand bags and named The Sandbagger" ... a place to socialize during down time.  This building's damage was sustained from fighting before the Marines arrived. 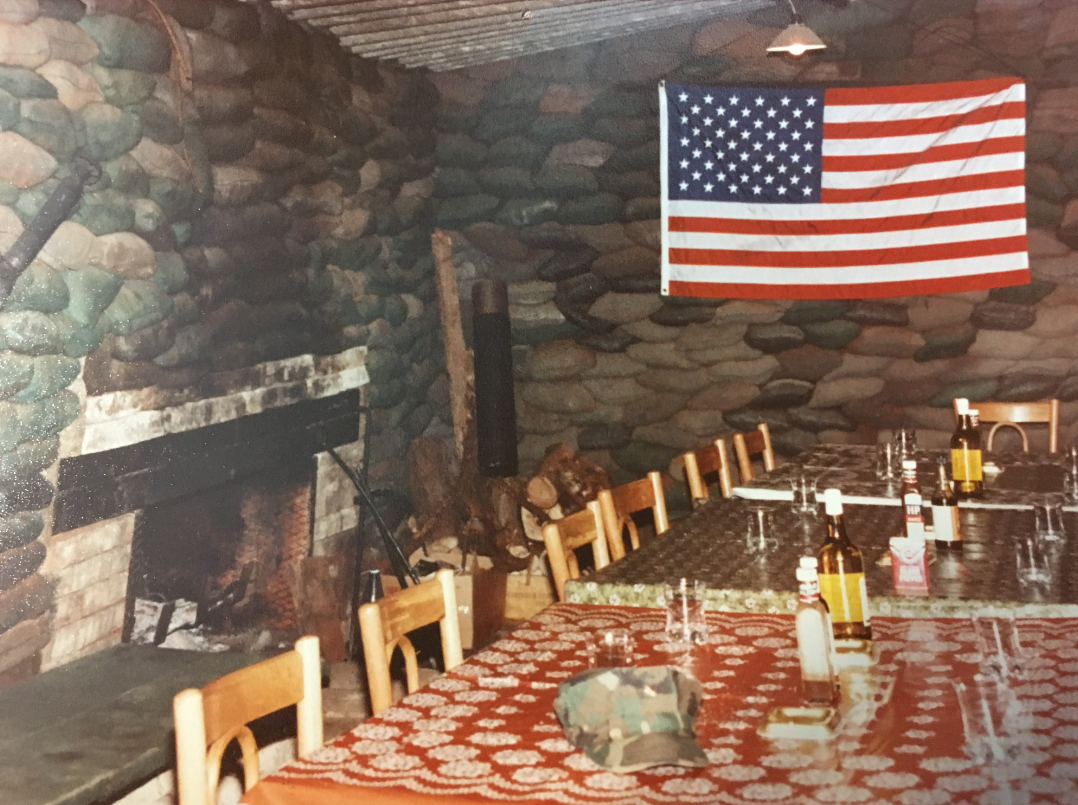 Inside the Sandbagger ...   This picture continues to clearly display our living conditions in Beirut and it was oftentimes a characteristic of some of the places the Marines deployed to as having a “club” for times when off duty. 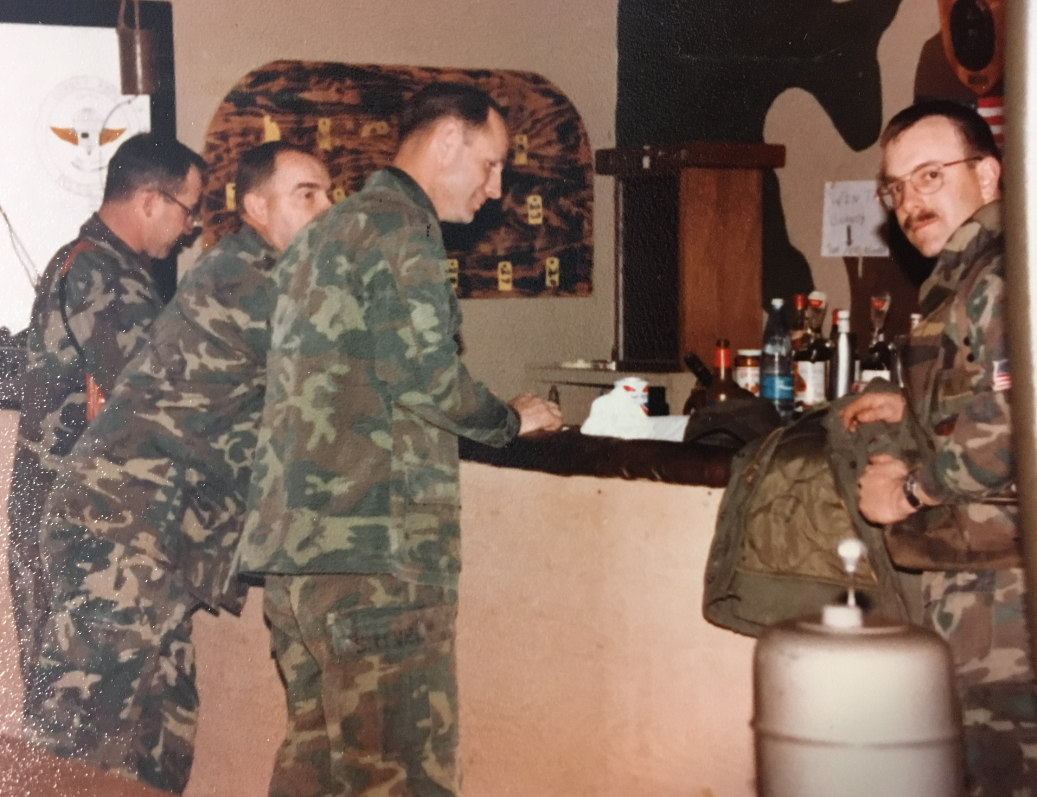 Sandbagger Bar - this was the bar in the Sandbagger, but the circumstances of the troops using the facility changed dramatically after the U.S. Embassy was bombed…about 2/3 of the way through the deployment. 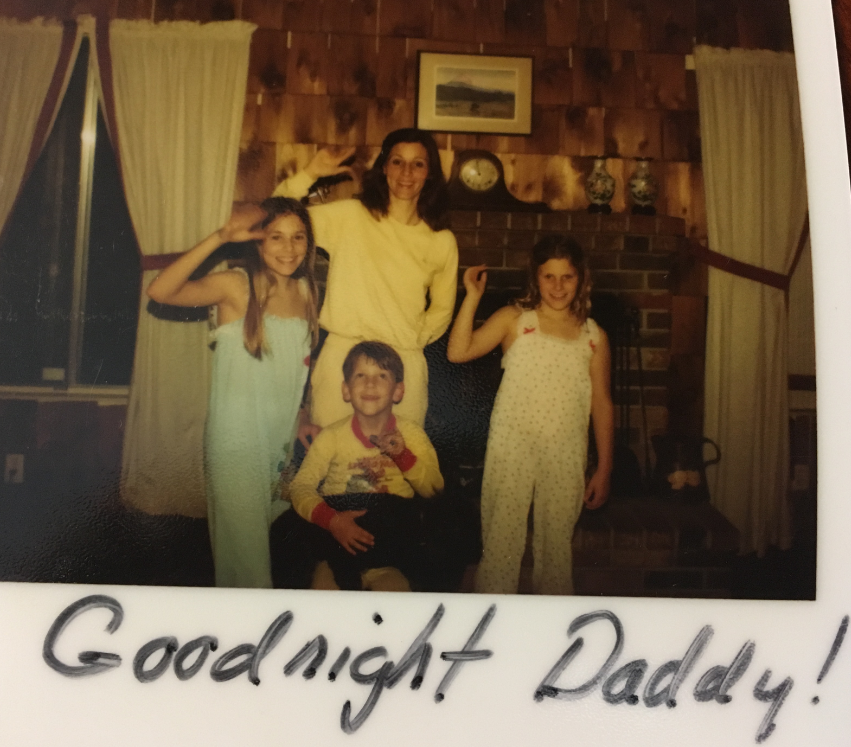 This picture from home was sent while overseas - Cathy had the children send me the photo to brighten my spirits. 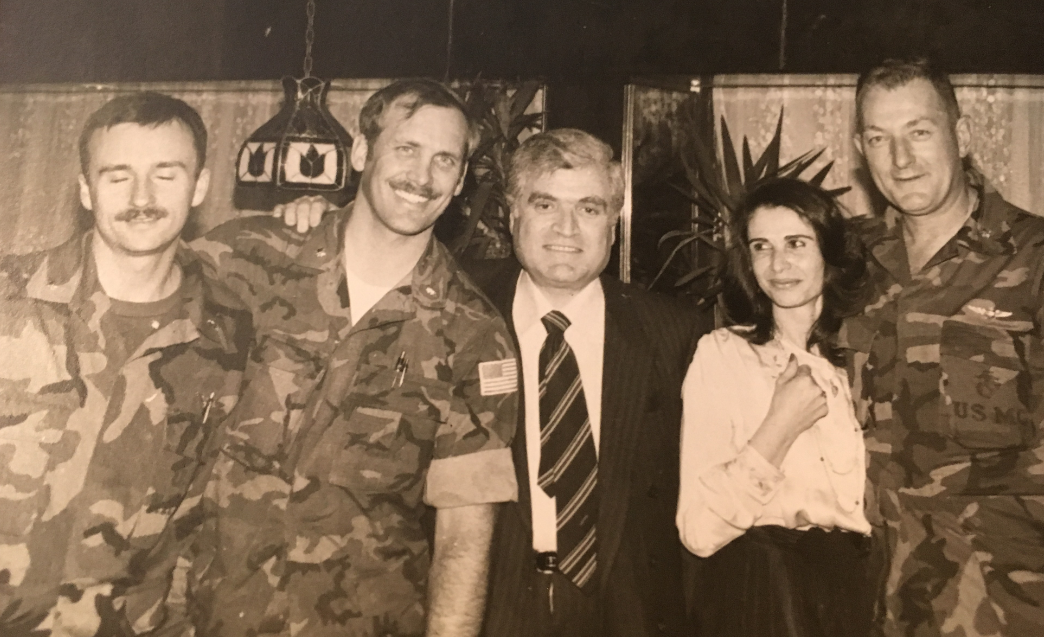 This picture was taken one evening when the Commanding Officer (COL Mead, USMC) selected from the persons assigned to attend a dinner hosted by a civilian (the man in the suit with his wife). The host had attended the University of Missouri but lived in Beirut as a representative for a cigarette manufacturer, and he wanted to express his gratitude for the Marines support in country. To limit the total number he could essentially host, Marines from the state of Missouri were selected.  We probably had a cadre of about 20 that accompanied COL Mead to a very posh restaurant before returning to base.  My sharing of the picture with LCDR Turner was an interesting story as both he and I were on the University of Missouri Swim Team prior to going off to our respective service assignments.  Jeff was initially in the U.S. Army as a helicopter pilot during Nam, but got out, went to school for his dental degree and came back on active duty with the Navy.  By happenstance, we were reunited after some 15 years when we were both assigned to the Marines in Beirut. 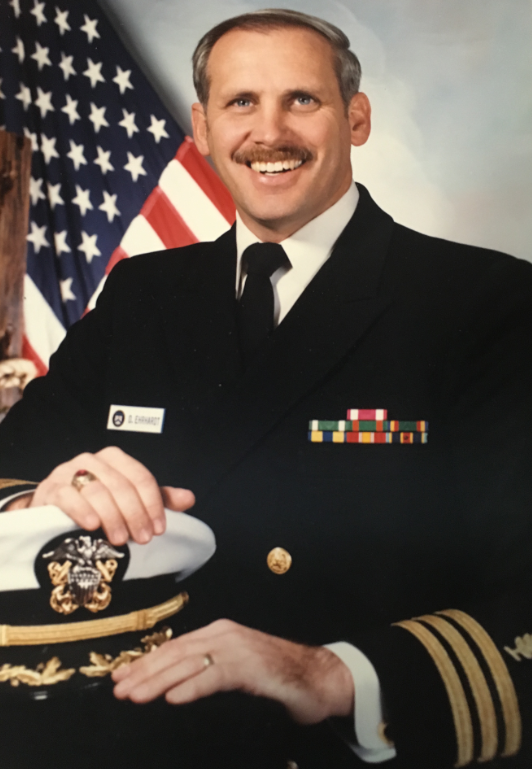 I was the Director of the Officer Indoctrination School in Rhode Island which all medical department, JAG officers and nuclear power officers attended prior to their first duty in order to learn proper decorum as a Naval Officer.  This was my official photograph in that assignment. 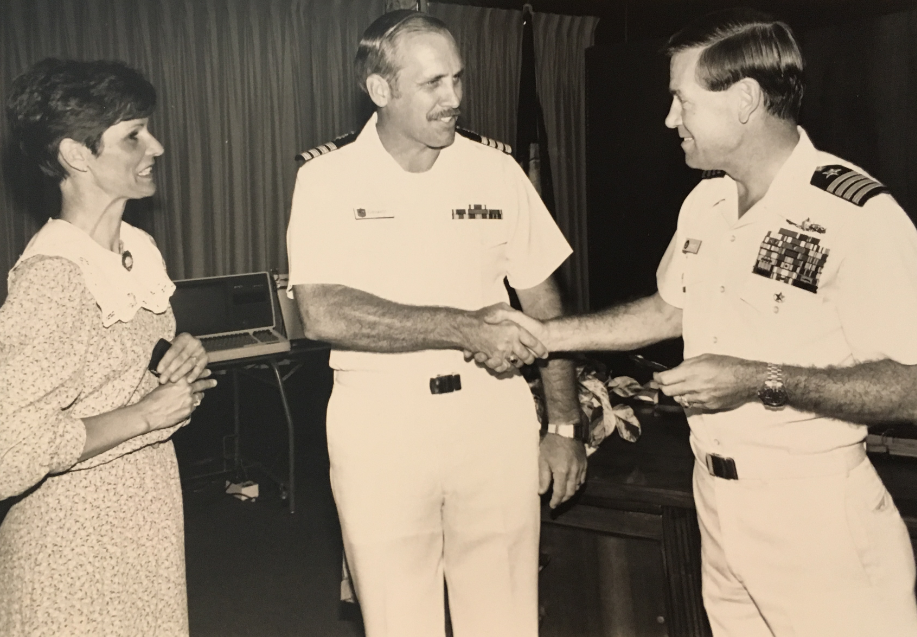 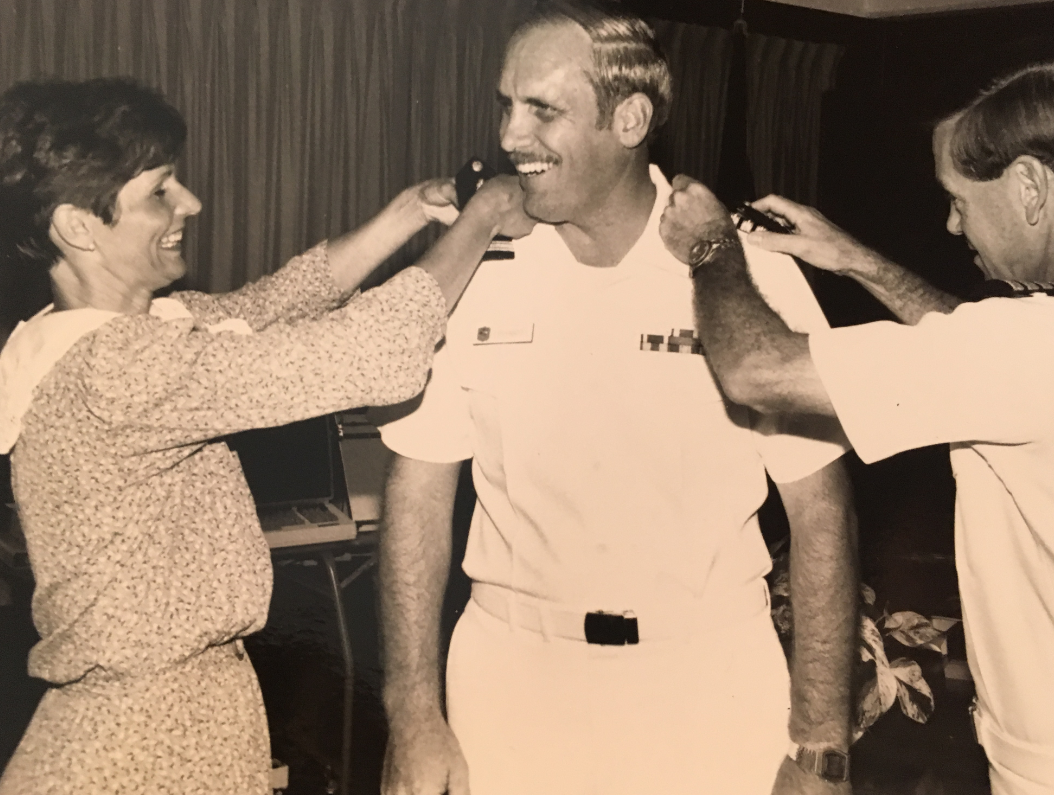 Pictured with wife Cathy at promotion 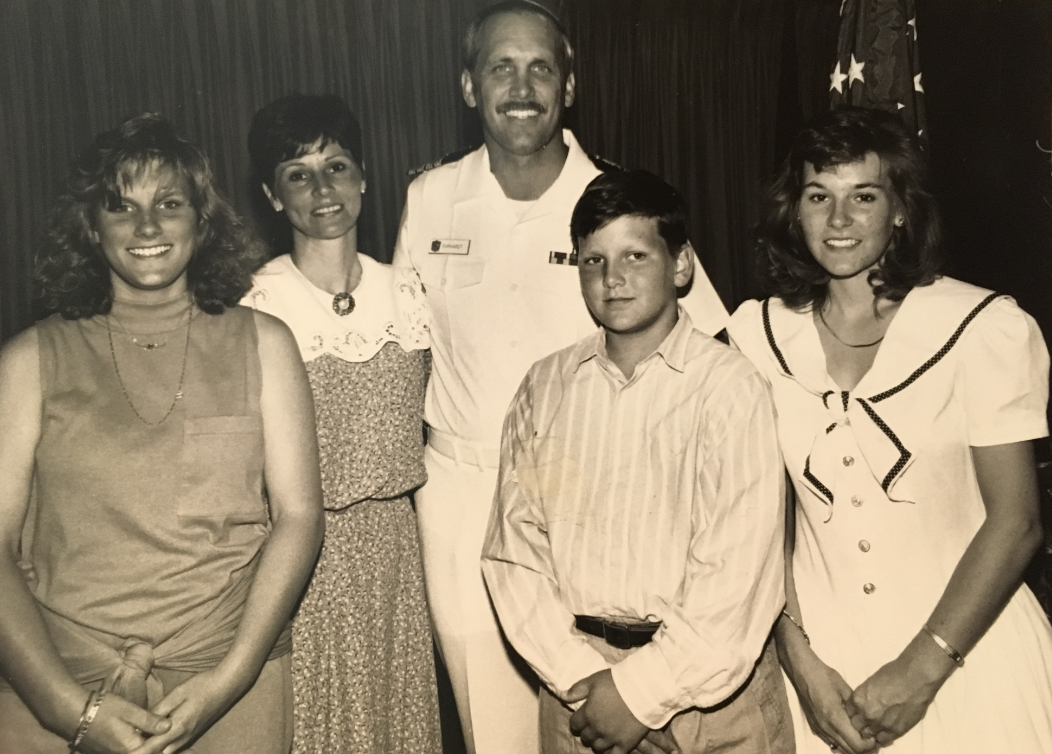 Cathy and Doug with their children (L to R: Jennifer, Greg, Stephanie) 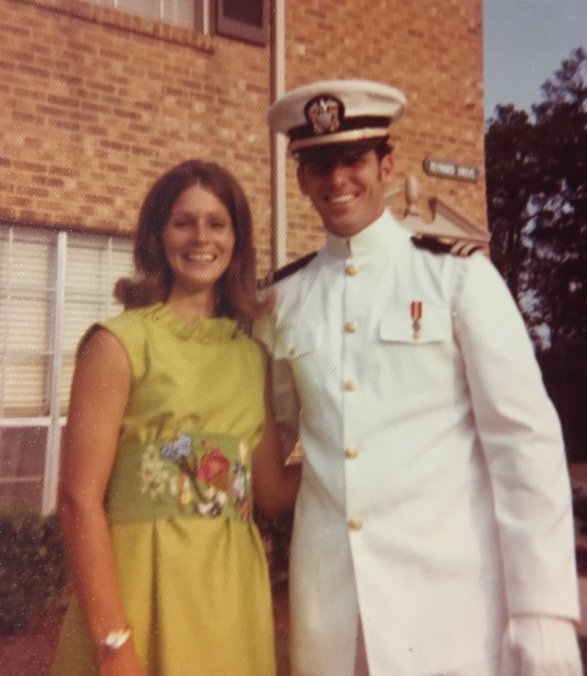 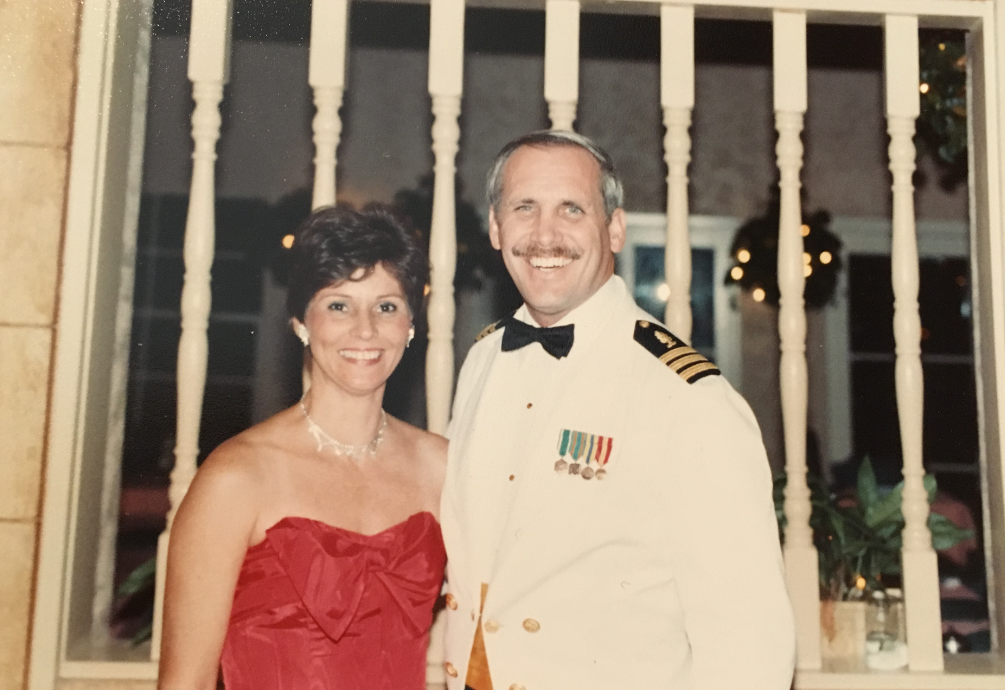 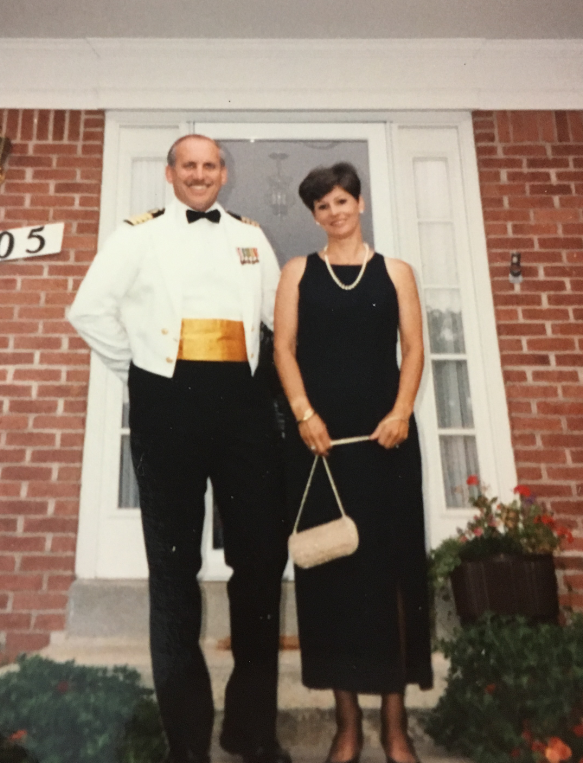 Douglas (Doug) Ehrhardt was born in St. Louis, Missouri, to Robert A. Ehrhardt and Nelly Mae (Sue) née Marshall Ehrhardt.  Doug’s father was employed as a salesman for Monsanto, an agrochemical company in St. Louis.  When Doug was ten years old, his father died of a brain hemorrhage.  His mother was a trained nurse, but due to severe asthma never worked for any length in the profession.  Doug provided care for his mother in her last years, moving her from St. Louis to Jacksonville, Florida, where he was stationed.  She died in 1974.  Doug was the youngest in the family with an older sister, Judith Diane née Ehrhardt DiBauda and an older brother, Robert Ehrhardt.

Doug’s family was very proud of him, as he was the first to serve.  He joined the Navy in 1969 while attending college, since he was #74 in the Army’s draft lottery.  Prior to serving, Doug attended the University of Missouri, earning a Bachelor’s Degree in Agriculture and a Master’s Degree in Entomology.  This provided him the qualifications needed for his direct commission as an entomologist in the Medical Service Corps. Doug also attended Oklahoma State University on out-service training from the Navy for a PhD in Medical Entomology.  Prior to leaving the service, Doug used his GI Bill to attend Hood College in Maryland, where he obtained a Master’s Degree in Business Management.

"On entering the service via enlisting in the Navy to preclude being drafted in the Army, I was part of a special recruiting initiative in St. Louis.  The Recruiting Station I St. Louis, recruiting 75 enlistees, was sponsored by the St. Louis Cardinals.  We carried a flag identifying our company as the Cardinal Company and took the oath of office on the field of a ball game during the 7th inning."

Doug entered the service immediately after completing his first master’s degree.  His original plan was to get out after three years and then to pursue jobs in his career field.  Instead Doug remained in the Navy for 30 years, serving the first eighteen years in operational preventive medicine and the last twelve years in research support billets.

"I introduced a peer of mine from OSU to the Navy who joined and remained in the Medical Service Corps for 24 years and now is retired in Fleetwood, where my family lives, and we continue to have good memories of our service time together," he said.

"I was commissioned as a Lieutenant Junior Grade, advanced to Lieutenant in one year.  Promoted to Lieutenant Commander after six years, Commander in five years and finally Captain in year eighteen of my career.  I retired as a Captain after 30 years."

As a medical service corps officer, Doug was fortunate that his wife was able to accompany him throughout his career.  All three of their children were born in military hospitals.

"After being selected for out-service training on my PhD at the Oklahoma State University I did research on the reproductive biology of horse flies.  I was also involved in a study on acaricide [for use on] mites at the University of Missouri.

"In both cases this work was very enjoyable, as the research was both cutting edge and made me think I was helping to pursue control measures against biting, and potentially, disease producing insects. One uncomfortable result while doing some chromatography under black light resulted in an eye injury, but luckily it was not long term.

"There was a professor in my PhD program at OSU that was very challenging…He taught numerous courses on insect taxonomy, both adult and larval, and made the learning about all manner of species a memorable one."

"My military lifestyle was essentially no different from a civilian job, as I went to work each day to support operational preventive medicine or research and development management.

"My family always accompanied me in my duty assignments, with the exception of a 6-month deployment as a Preventive Medicine Team leader with MSSG 2-2 to Beirut, Lebanon, in 1983 in support of the Marines."

Doug left the service in the DC area and immediately went to work as a contract employee of the Henry M. Jackson Foundation for Military Medicine as part of the Uniformed Services University of the Health Sciences in Bethesda, MD, supporting the Military and Emergency Medicine department.  He initially was employed as a Special Projects Officer, later as deputy, and lastly as the Acting Director of the Center for Disaster and Humanitarian Assistance Medicine.

Doug is a long-time member of the Military Officers Association of America.  He has served as the President of the local MOAA chapter in West Jefferson, the New River Chapter, and was the 2016-17 President of the State Council of MOAA.

When considering how the military affected his life, Doug says, "I can honestly state that being a professional entomologist in the Navy and later as a staff/senior management officer/director of my post-Navy work, helped in my career path for the duration.  I learned professionalism, leadership, and personal management."

Doug's feelings about war and the military in general made a big impact on him; "I strongly supported our military in all their missions that I experienced in my 30 years on active duty, as well as the decisions made by higher leadership during those times.

"In my retirement I continually hear from others who observe my NAVY ball cap and hear about my having spent 30 years on active duty, that they often reflect on ways that their own lives, post-service, could have been influenced by remaining on active duty to retirement.

"I think that any individual considering whether to serve, should weigh the opportunities for him/herself and choose to follow a path of their own future growth when thinking about some of the varying paths to success the military can provide," he says.