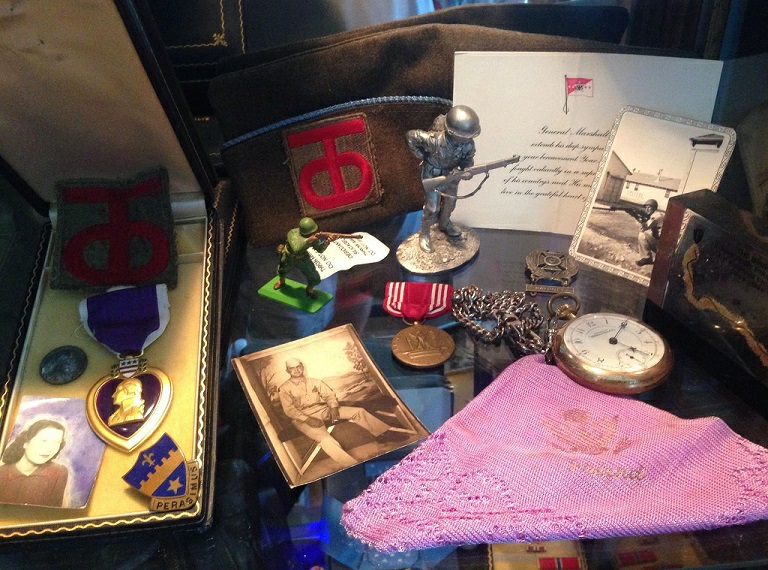 At left, Coe Eller’s posthumously awarded Purple Heart and his personal effects when he was KIA: a photo of his wife, Ruth; his unit crest; a copper penny and the 90th Division patch he was wearing. Photo by Pete Eller. Reprinted from Ashe County Line with their permission. 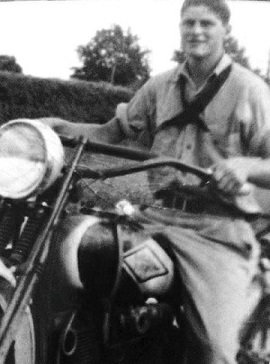 A young Coe Eller riding a Harley-Davidson motorcycle. Photo provided by the Eller family and reprinted from Ashe County Line with their permission. 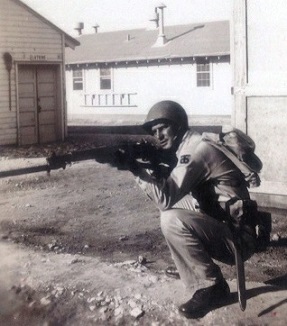 Striking a combat pose at Camp Barkeley, Texas in 1943. Photo provided by the Eller family and reprinted from Ashe County Line with their permission. 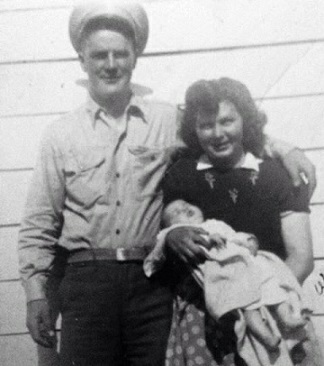 Coe, Ruth and Wayne Eller in early 1944. Photo provided by the Eller family and reprinted from Ashe County Line with their permission. 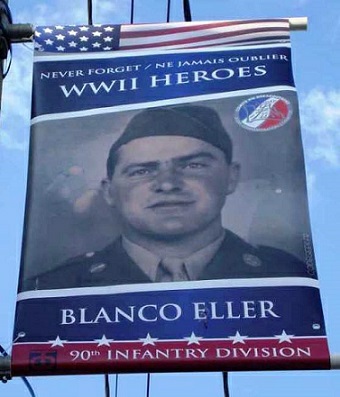 The banner flying in Chef du Pont, France in Eller’s honor. Photo provided by the Eller family and reprinted from Ashe County Line with their permission.

This article originally appeared in the Ashe County Line on June 6, 2019. It is reproduced here with their permission.

FRANCE - Seventy-five years ago today, Allied forces launched a combined naval, air and land assault on Nazi-occupied France. The code name for the operation was “Overlord,” but most people know June 6, 1944, as D-Day.

The beach landings that took place in five locations code named—Utah, Omaha, Gold, Juno and Sword—marked the beginning of a long and bloody campaign to liberate France and northwestern Europe from German occupation.

Part of that invading force included Ashe County native Blanco “Coe” Eller, a private first class (PFC) in the Army, who came ashore on June 8 and didn’t live to see the sun set on June 10.

Born on April 20, 1918, while WWI was still ongoing, Eller found himself in another world war soon after he reached adulthood.

Reared on a farm in the Phoenix Creek community, Eller was a horse lover who could often be found working with the farm’s horses. He was a member of the Civilian Conservation Corps and had an affinity for Harley-Davidson motorcycles.

He had two older brothers, Walt–the oldest–and Marv. Coe had a twin brother, Blan, and a younger sister, Wava. He also had a younger brother named PJ.

In April of 1942, Coe Eller married Ruth Oliver. They began their life together, but like many young American men of that era, Eller was drafted in October of 1942. When he departed for basic training at Fort Bragg, Ruth was pregnant.

After completing basic training, Eller was assigned to Company A in the 358th Regiment of the recently reactivated 90th Infantry Division at Camp Barkeley, Texas.

The 90th Division patch, worn on each Soldier’s left shoulder, consisted of the red letters T and O. This was a carryover from WWI when the division was largely made up of troops from Texas and Oklahoma and was called the Texas and Oklahoma Division.

Selected to land at Utah Beach on D-Day, the 90th Infantry Division would go on to become one of the Army’s most decorated units, suffering more than 18,000 battlefield casualties in the process – Coe Eller among them.

They were amongst the first units to go ashore in France and took a staggering blow from entrenched German forces, but then overcame the onslaught and delivered their own decisive blows as they made their way across France to Hitler’s front doorstep.

Based on that storied record, the division is now referred to as the “Tough ‘Ombres” and today the red T and O insignia recognizes the unit’s historical accomplishments, signifying it as one of the Army’s best divisions.

Eller was among the hundreds of new recruits who came from all over the country when he reported to Camp Barkeley, located in mesquite country near Abilene, TX. Still fresh from civilian life, these new Soldiers underwent a vigorous training program to get them ready for combat.

On January 26, 1943, his regiment, which was now motorized, headed down the highway to Louisiana where the unit took part in simulated war exercises. Once the wargames ended, they returned to Camp Barkeley.

The unit headed west on August 4, traveling by rail with their ultimate destination being the California desert. Eller and his unit spent 5 months training in desert conditions, ending the deployment by participating in a large-scale simulated wargame that stretched from Needles, CA to Yuma, AZ.

While in California, a hometown press release about Eller appeared in the local paper saying: “Pvt. Blanco Eller, son of Mr. and Mrs. B.H. Eller of Jefferson, is now stationed in California taking desert training. He has been in the service for 13 months and is with the Infantry. He says although the work is hard, he is liking it very much. He also says to tell his friends hello and urges them to write to him.”

A coast-to-coast rail trip moved the unit from the Pacific to the Atlantic and on New Year’s Day 1944 Eller and his fellow Soldiers, for the first time, settled into comfortable quarters at Fort Dix, New Jersey.

Though their stay would be short-lived, Eller was able to take some leave and visit his family in Jefferson where he met his son, Billy Wayne Eller, for the first and only time. It was a happy occasion for the Eller’s and Coe posed with his family in several photographs.

Back at Fort Dix, Eller and his unit moved by rail to New York Harbor on March 22, boarded a ship under cover of darkness and set sail for England.

Arriving in Liverpool, the troops were moved by trains and located south of Birmingham, England where their training focused on physical conditioning. Each day the Soldiers were required to carry their full complement of combat gear on fast road marches.

On May 12 they moved again to a camp near Newport, Wales. Most of their time here was spent making sure all their equipment was in top shape and on June 4 the unit moved dockside at Newport Harbor where vehicles, equipment and personnel were loaded onto ships.

Once loaded, the ships set sail and proceeded to rendezvous near Cardiff, Wales. Onboard it was obvious the big event was about to unfold. On the second day the convoy of ships sailed from Cardiff, but remained in sight of the English coast.

It was then announced onboard that it was D-Day and paratroopers were fighting in France and Allied troops were now landing along the Normandy coast. Last minute details were seen to and the regiment’s chaplains held church services that were well attended.

At eleven o’clock the morning of June 8, Eller and his unit dropped anchor off the coast of “Utah” beach. Debarkation began at 11:58 a.m. as landing craft pulled up alongside the ships and the troops began climbing down the landing nets to get into the smaller boats.

Once ashore the regiment was officially in the war. The day following the landing was focused on reorganization and getting all the vehicles and equipment to the right companies and battalions. Within 24 hours of landing they were ordered to attack.

A battalion of paratroopers were pinned down near the village of Chef du Pont. Eller and his regiment moved to help secure a bridge and rescue the paratroopers. Unit histories report the German mortar fire was “murderous.”

According to a letter Coe Eller’s wife received from his best friend, the two of them were in a hedgerow about 8 o’clock in the morning of June 10 when a mortar round exploded about 15 feet behind them. A large piece of shrapnel hit Eller above the right kidney nearly cutting him in half. His last words were, “oh medic,” as he succumbed to his mortal wound.

PFC Eller was buried in Blosville Cemetery in France. According to Eller’s nephew, Pete Eller, Coe’s father, B.H. Eller, wanted Coe returned home and reburied in the mountains where he grew up. His remains were repatriated in December of 1948.

A funeral was held at Bristol Baptist Church in Jefferson and Eller was interred in the Calvin Eller Family Cemetery.

Last December Pete Eller got a call from someone stateside who had a relative living in France. They’d used “find a grave marker” to locate Coe’s gravestone and, in turn, contacted the Jefferson Town Hall and someone there put them in touch with Pete.

As part of the 75th anniversary remembrance, the village of Chef du Pont is honoring service members who died during the liberation of France. A banner of PFC Blanco Eller is currently hanging in the village and there are plans to install a bronze plaque commemorating the actions of these heroes.

Pete Eller expressed his sentiments this way, “Even though I was born 21 years after Coe was killed, I’ve tried to keep his memory alive by telling his story. When the French town of Chef du Pont contacted me about commemorating Coe’s story, I thought all the research and displays had finely come full circle. I’m at peace now knowing his memory will live on for another 100 years.”

Although his life was cut short at just 26 years of age, Blanco “Coe” Eller’s legacy lives on as he was truly one “Tough ‘Ombre.”