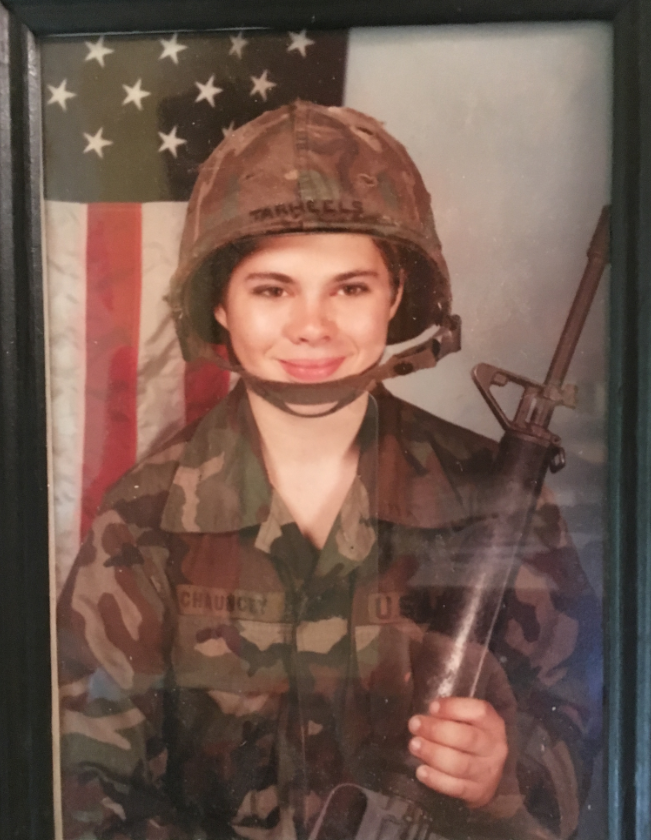 Maureen Dintino served in the Army from July 1984–1987.  Her father told her she was either going to choose "college or the military."  She wanted to get away from home and was sick of school, so she enlisted.  Her unit was 1st Battalion, 1st Brigade, 4th Platoon, and named by her as the "Tarheels."  During her service time, she was stationed at Fort Dix, NJ, Fort Monmouth, NJ, and Fort Jackson, SC.  She qualified in training to drive one-ton vehicles but had to sit on telephone books to see out. She was also qualified to use an M-16 Sharp Shooter, receiving a Sharpshooter Award and Service Ribbon.

Maureen worked as a Chaplin's Assistant, with duties that included setting up speaker events for officers and enlisted men, getting the baptismal pool ready, and taking Jewish soldiers to synagogue.  Sometimes she assisted with pre-counciling soldiers who were scheduled to see the Chaplain, most cases had to do with homesickness.

"On looking back, the thing most engrained in me during my years in service was the structure and uniformity.  You had to use a chain of command no matter what the job."

Although Maureen didn't see combat , she did suffer from service-related injuries. Heavy lifting of chairs and equipment for events left her with lower back and right hip/leg trouble.  She also experienced PTSD after one of her comrades died by suicide.  Maureen says, she wished more people knew that a veteran is anyone who served in the military, not just those who were deployed in wartime.

"On looking back, the thing most engrained in me during my years in service was the structure and uniformity.  You had to use a chain of command no matter what the job."