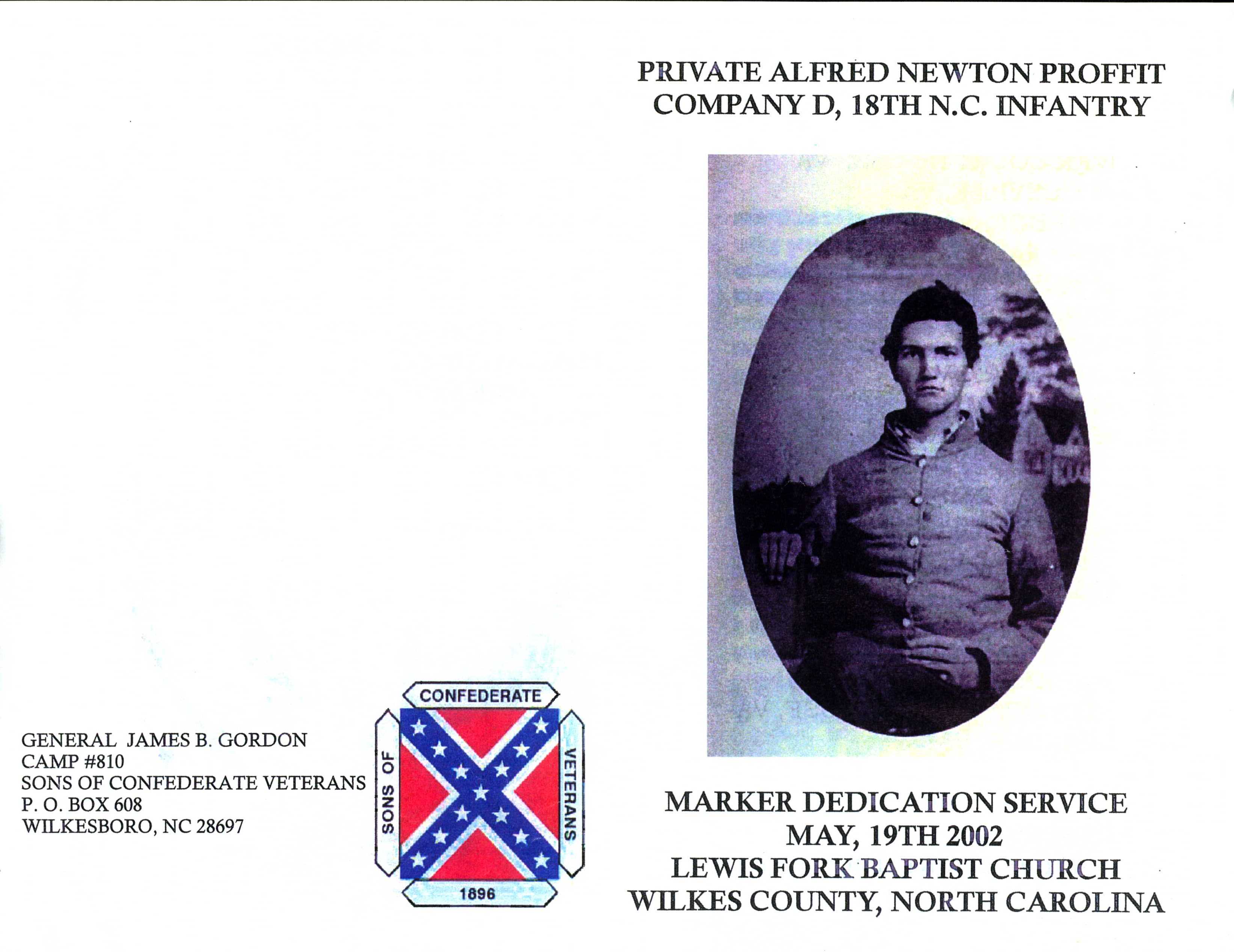 Alfred Profitt was one of four brothers who fought for the Confederacy in General Lee's Army of Northern Virginia, General Stonewall Jackson's Corps.

Andy, Harrison, Alfred, and Calvin were 'Four Brothers in Gray' from Wilkes County, and their story is told with original letters, with authentic (mis)spelling, written during the Civil War.  Thanks to Mary Alice Hancock who compiled these letters for us to learn what those times were like.  The snippets from those letters came from a book that can be found in the Wilkes Library Genealogy Room, Wilkes Community College Library, and Wilkes County Heritage Museum.

In January 1863 - advice for father who was having a stark struggle to eke a living from the farm.

" Do the best you can, Pa, till we come home and then we will help you to do.  Bee surtain to keep the mules.  Bee sure to set you out an orchid for I see the nead of them.  I am paying $3 for apples green and fifty cents a quart for red ones.  Send some molasses and brandy if you can.  Send some soap,  It is one dollar a pound."

" We are waiting for the Yankees to make a move and then we will give them a cawl. We are strongly fortified from Fredericksburg to Fourt Royal, and it is the jeneral opinion of all if they do cross here they will get the worst whipping they have ever got."

"We are still in camp . . . but we expect an early attack some where between hear and Fredericksburg soon . . . "

"We left camp Wednesday.  We reached the field in time to go into it the next day.  There was hard fightig all day.  The Yankees held their position vary well.  The next day (when) it was light enough to see, they fired a signal gun then they charged and the first fire the infernal rascals fired, they put it to me.  I was struck just above the right eye.  It split me to the skull about three inches . . . When it gits well I will fight them again . . .

June 2 - news of Andy, from Alfred

"I am in good health and a nurce in (this) hospital. I have a heap to do.  We have a heap of bad wounded and lots of them are dying . . .   I wrote to Andy a few days ago, but it was answered, it came from the Sergtr. of my Co., informing me that about half of our Regt. was taken prisoners cince I left - Andy with the rest . . . Thare is but six of my Co. left.  I shall have a small Co. when I git back . . . Our forces are still in line of battle near Richmond, but not mutch fighting going on . . ."

"I am still at the hospital, assisting in cooking for the sick and wounded . . . The Yankees has made a raid on this place cince I came here. They came vary near taking it but we got troops in time to give them a nice thrashing.  They had to leave all their wounded in our hands.  We have about one hundred in this hospital.  They are the worst wounded men I ever saw.  A good many have died . . .

" I want you to give me a full account of our affars at home, the small grain, the corn crop, the fruit . . and how those trees don that I holpe set out . . ."

"We have women hear in the hospital attend to the men who call themselves Sisters of Charity belonging to the Catholick Church.  They dress in a different way from any other woman . . . Their bonnets . . . remind me of some great fowl with its wings spread in the air to sore aloft in the skies . . . "

"We have but little wood and the wind begins to blow pretty cool.  It looks like we would suffer with coaled this winter.  No prospect of going into winter quarters this winter . . . I fear we will haft to stay in the ditches . . . "

"Sis, last night I dreamed of you and many others of my friends whom I would love to see, but can't say when I shall, but soon, I hope . . . "

" We are still on the line three miles west of Petersburg.  We don't anticipate another ingagement with the Yankes soon for we have been building winter quarters . . . just in rear of our works . . ."

"Cinse I last wrote you I have been nearly to N.C.  A party of Yankeys made a raid down the Weldon Railroad about the Nottoway River.  It hit just right for the cold spell of weather that come a few days ago.  It rained, snowed, hailed, and the wind blew hard and the way it was cold you don't kow.  It was hard to take just out of good warm winter quarters . . . "

"We are now in our same quarters.  Cinse I comenst this letter I have taken a harty breakfast of pease and potatoes.  The buoys of Co. "D" have lately got some boxes from home and I taken some with them . . ."

"Christmas is near at hand and the prospect for a good dinner is bad, but I hope times will change before the day comes. . . "

The day came when the war ended and only Alfred returned home.  He lived to be 86 years old, dying in 1929.  It was in his late eighties that Alfred sneezed out that tiny lead ball from his battle injury ("struck me just above my right eye and split me to the skull about three inches").