Photos and Letters - Pat McNeil and the SCV 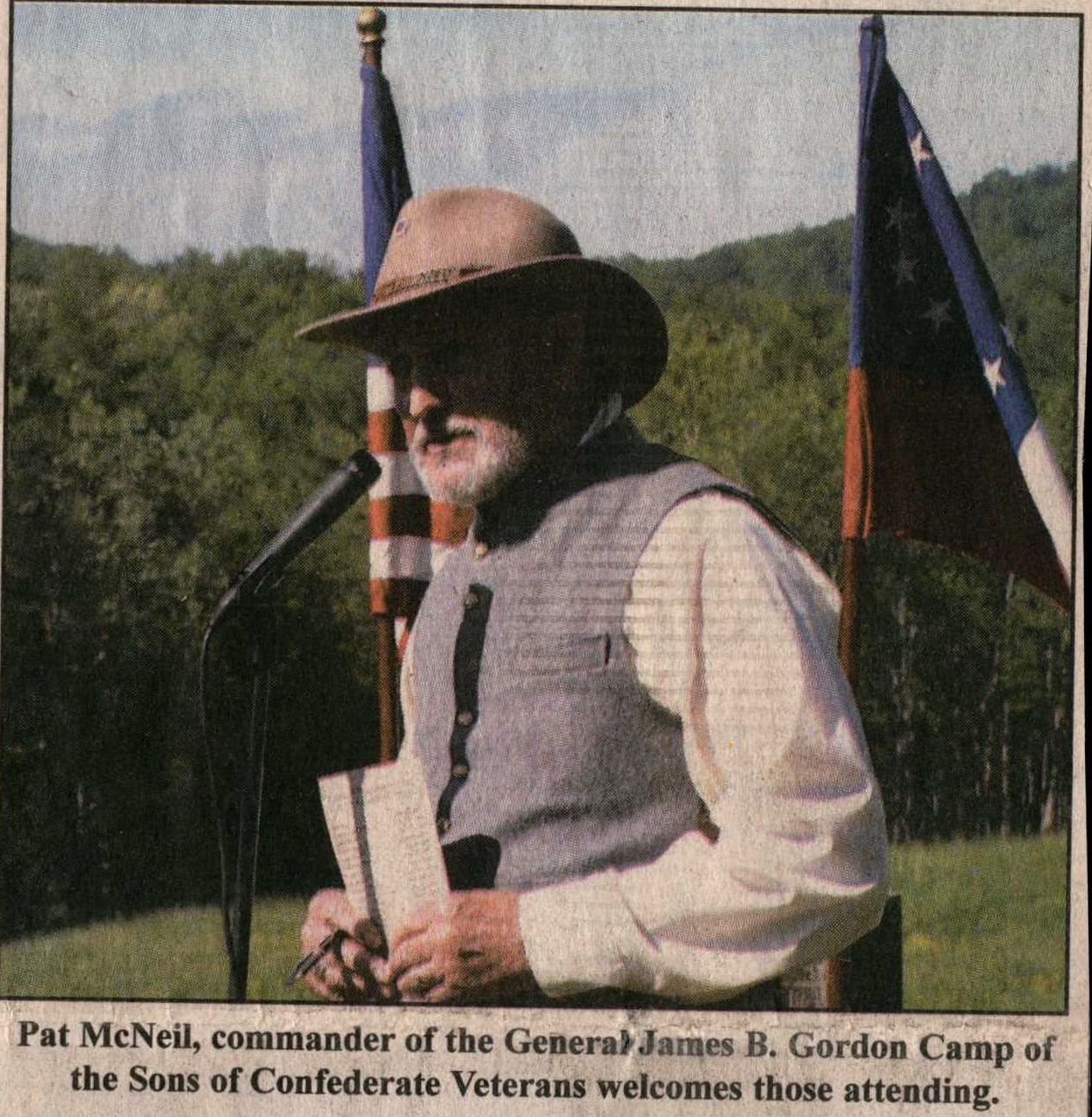 Pat at a reenactment 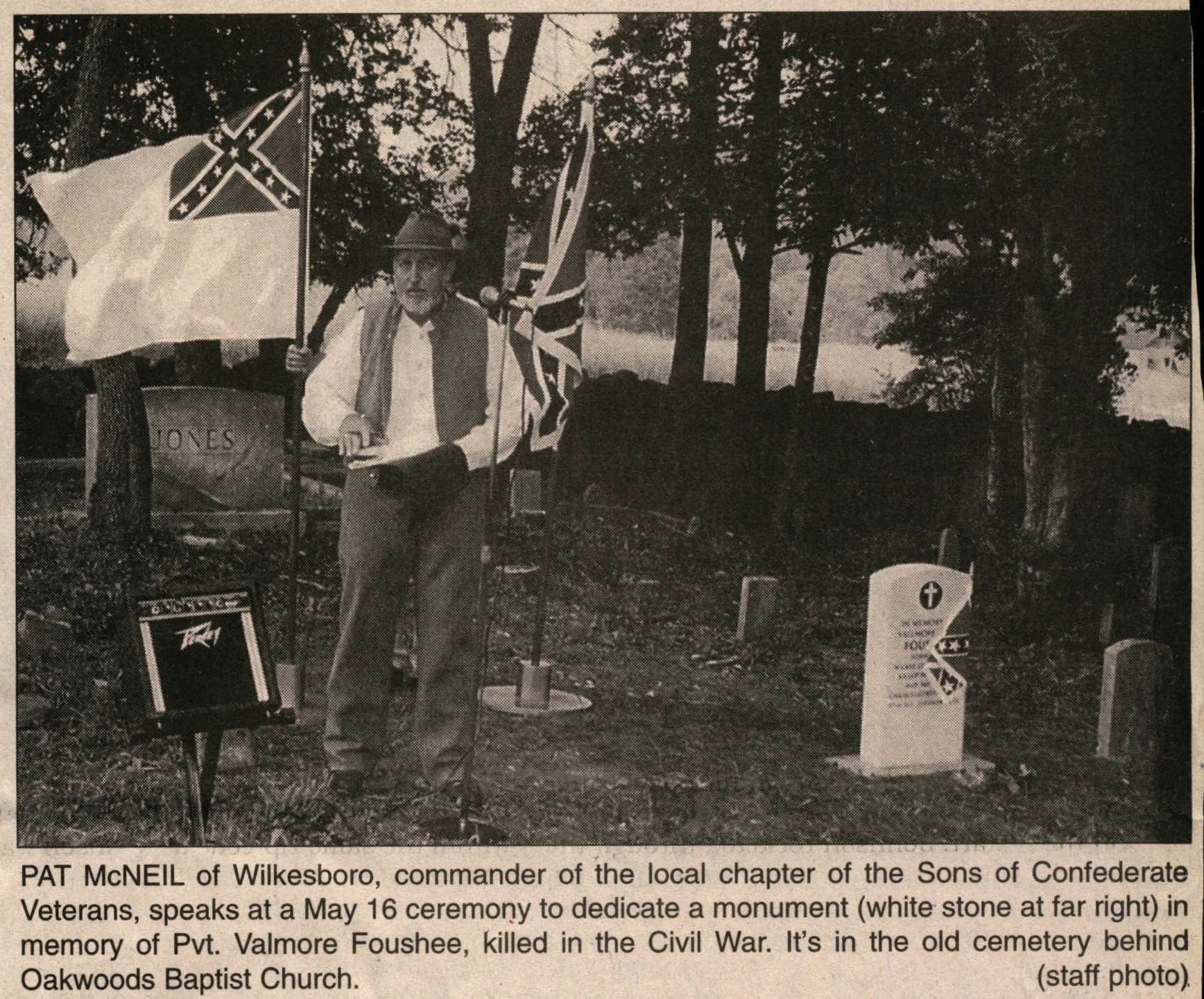 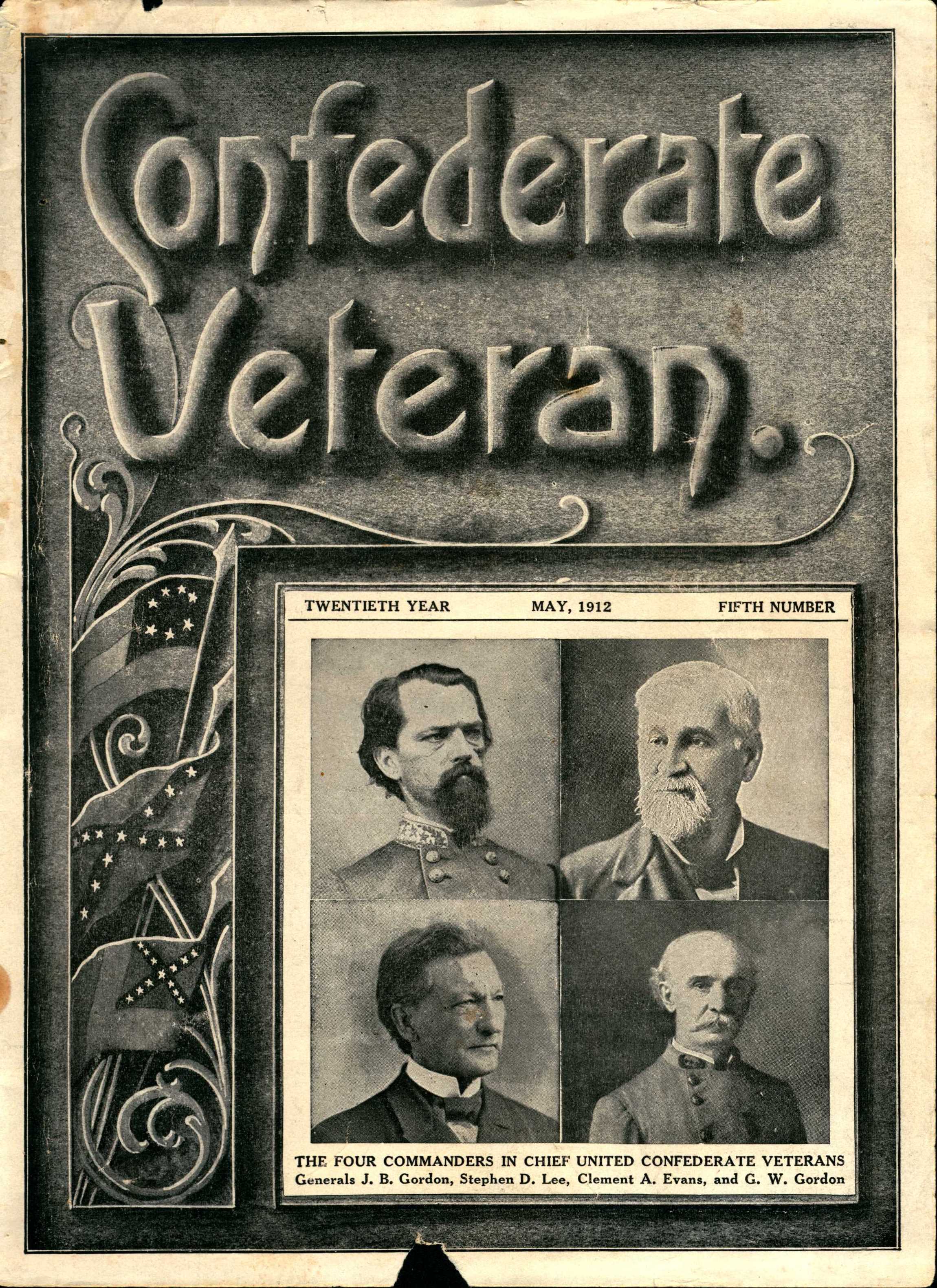 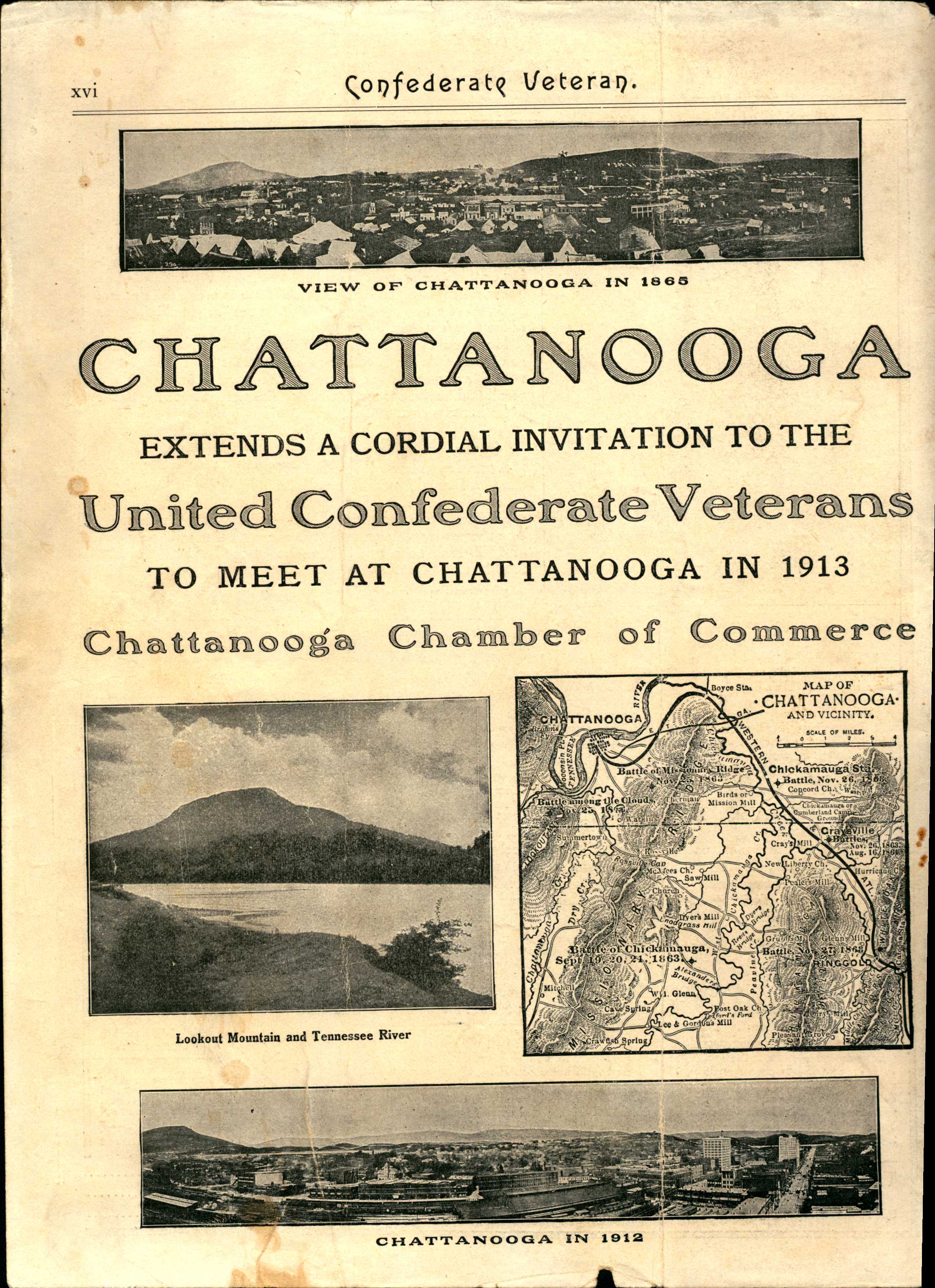 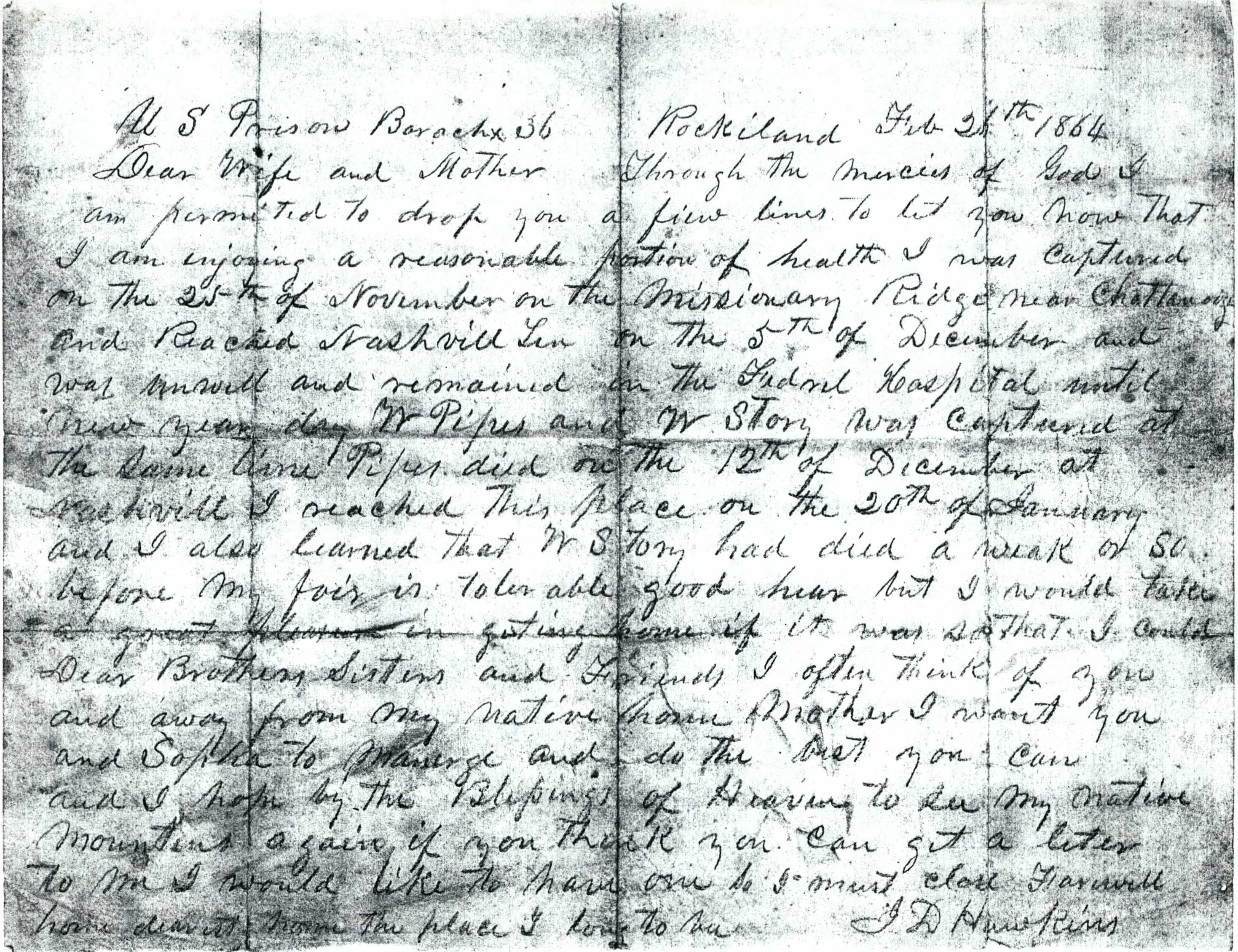 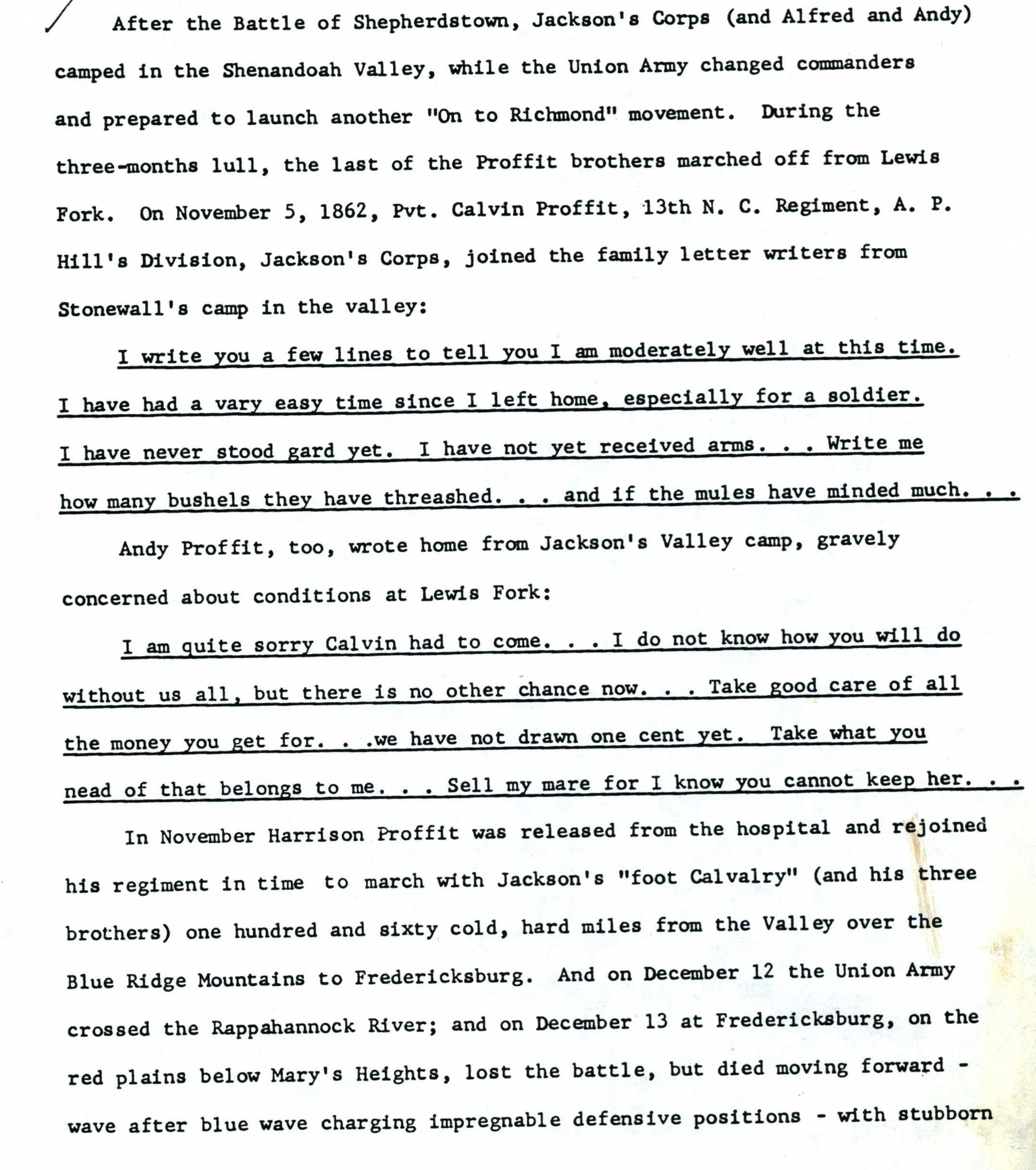 Part 1 of a Letter Written During the Civil War - excerpt from "Four Brothers in Grey" by, Mary Alice Hancock 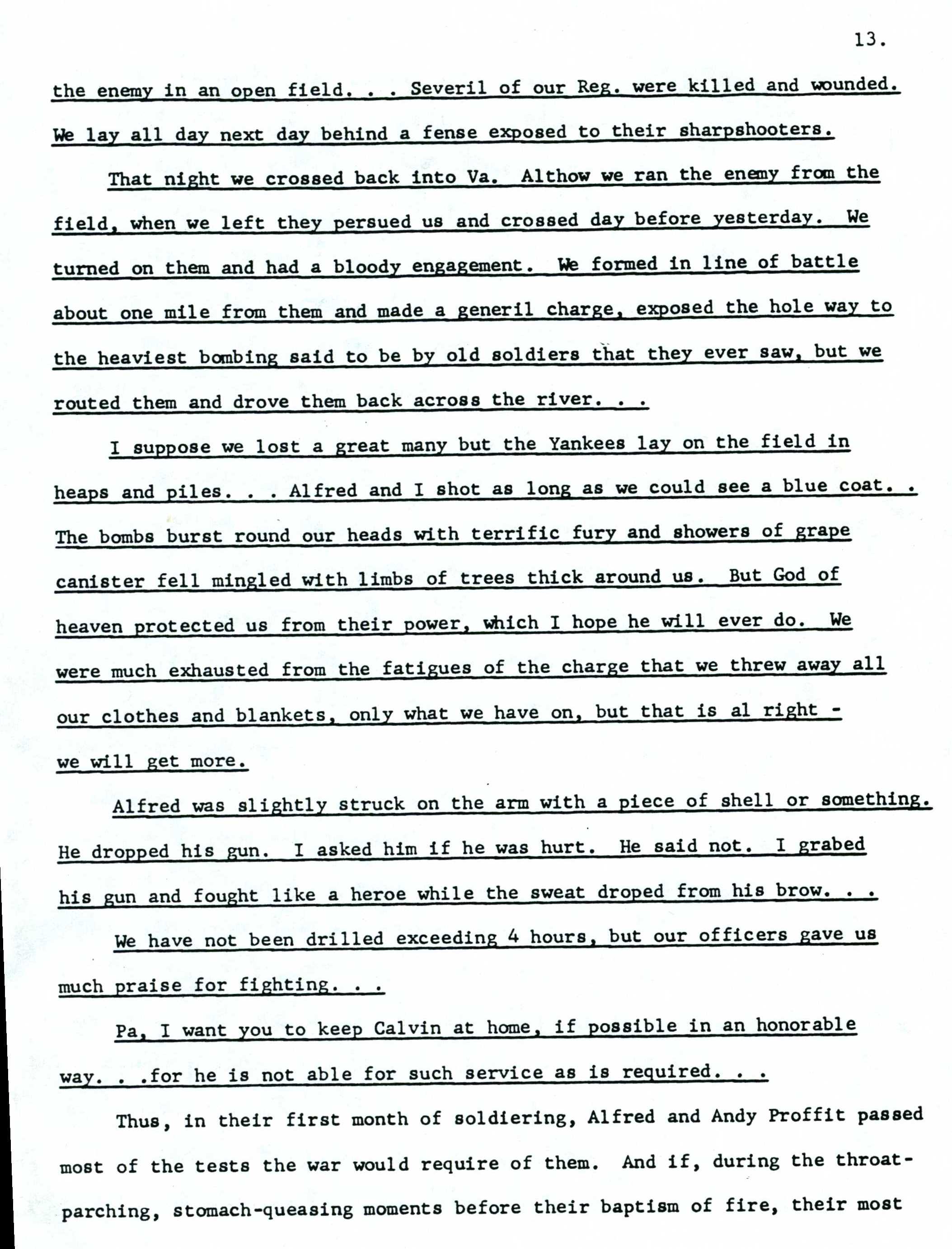 Part 2 of a Letter Written During the Civil War - excerpt from "Four Brothers in Grey" by, Mary Alice Hancock 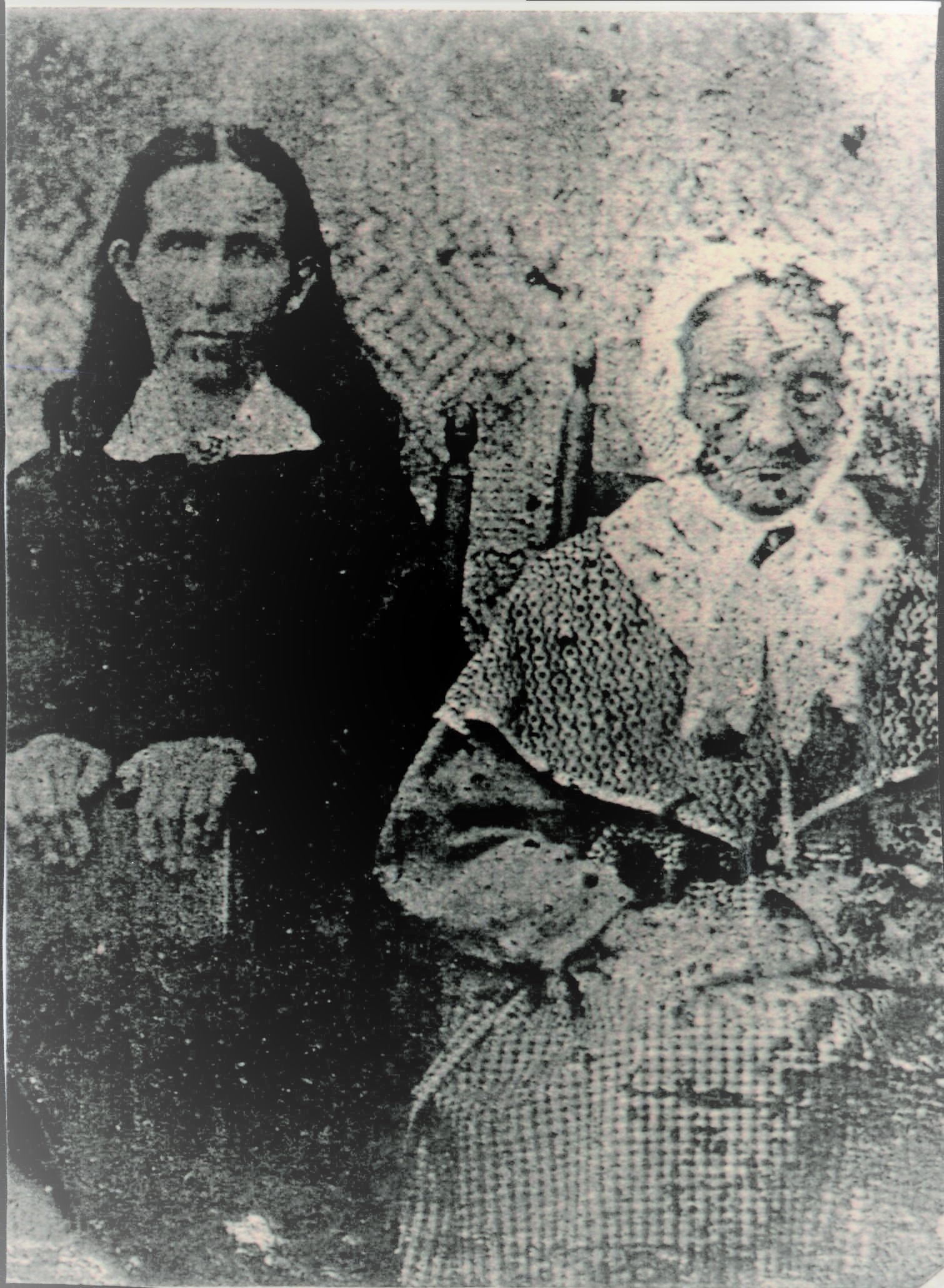 and her mother Polly Dula Ferguson 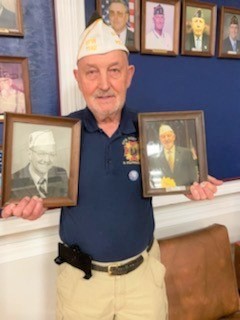 Pat is holding framed photos of himself and Harold Proffit (grandson of Alfred Proffit).  These are on display at the Wilkes VFW headquarters.  Both Pat and Harold previously served as VFW Commanders. 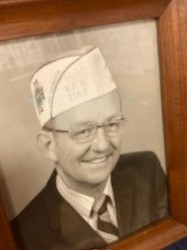 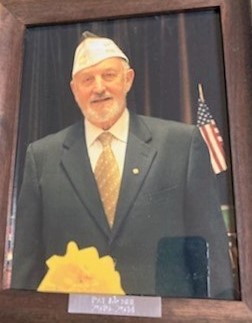 Pat McNeil has served a total six years as a Sons of Confederate Veterans Commander for The James B. Gordon Camp.  The group was rechartered from the 1920s and began meeting again in 1995 to talk about The Civil War.  The group began with about 20 members.

The Sons of Confederate Veterans is a good avenue to study the war and learn from ancestors.

James McNeil was conscripted into the Confederate Army December 1864, at the age of 49.  During those years, soldiers were drafted from ages 14-49 years old.  He was married to Fannie Dula (cousin of Tom Dula) and had five children.  James served as a guard to 10,000 Union prisoners at a camp in Salisbury, NC.    When Fannie heard that her husband had become sick, she struck out, in the dead of winter, by horse and wagon to bring him home.  He died on February 15,1865 and is buried in the McNeil family cemetery.  There was a discrepancy between the military records and the family records, as to his place of death.  The military records say he died in Salisbury and the family records say that he actually died at home.  Pat suspected that Fannie had to tell someone that James was dead in order to have him released to her.  It is hard to imagine that long, arduous trip home, by wagon in the dead of winter, while near death.  Fannie had to bring along food for the horse as well as herself and James.  There could have been any number of catastrophes along the route.  At that time of year, supplies were low and hunger was a problem.  There could have been encounters with the enemy.  The wagon could have either broken or become stuck in the muddy roads.  The horse might have broken a leg, etc ... Fannie was a brave and determined woman.   This whole scenario could be compared to a trip across the states in a car that isn't road-worthy.

Pat's great grandfather, Jessie D. Hawkins, an Irish farmer in Caldwell County, actually joined the war.  He didn't believe in government at all, and just wanted to be left alone.  He thought the Confederate government would have been less government than the Union government.  He joined the Confederate Army in Boone, NC and then was sent to Tennessee during the later part of 1861.  He was captured in November of 1863 on Missionary Ridge (Chattanooga, TN).  After he was captured, he was sent to a federal prison camp in Rock Island, Illinois.  Once they were there the temperature dropped to 40 below zero.  There were about 10,000 prisoners in that camp.  Around 2,000 died from the extreme conditions of cold and disease.  Jesse lost one lung and when the winter of 1864 rolled around, he was not sure he would survive in that prison.  He was given a choice to serve in the Union Army as a frontier soldier or join the Union Navy.  Either of these options placed him far enough away so there wouldn't be a chance that he might desert and return home. He chose frontier service and went to Nebraska Territory to not only fight in the Civil War, but also against Indians.  He was trying to survive and just did what he had to do. He stayed there until the fall of September 1865 and then was transported by train to Statesville, NC.  From there he walked home, about a fifty-mile trek.  He went right back to farming and survived the war after being gone for another four years.

Pat had four great uncles, 'the Barlow brothers,' who served in the Confederate Army.  Two brothers, Thomas and Henry, joined the 26th regiment.  Henry was wounded on the first day of fighting at Gettysburg and was furloughed to Wilkes County for recuperation.  He later returned to the Confederate Army.  His left arm was shot off at Cold Harbour (near Petersburg) in May 1864.   After his arm was removed he was sent back to Wilkes County to recuperate, but died of blood poisoning on July 1 in 1864.

Thomas fought in a battle at New Bern, and later disappeared.  He had  gone into hiding around Ashe and Watauga counties, and later went to Knoxville to join the Union Army.  Two other brothers, John and Larkin joined the 37th regiment and were killed in action. Larkin was killed on the battle of Hanover Courthouse, Virginia.  John was wounded and captured there.  He died later in prison camp.

Pat also shared stories from a series of letters by the  Proffit brothers, written over 150 years ago and housed now in Raleigh's archival collection.  The men fighting were very sensitive about family and often asked how the mules were doing.  One story talked about George Stoneman a Union Calvary General who came and took the mules.  The women at home had a hard time and some said "we need you worse than they do."