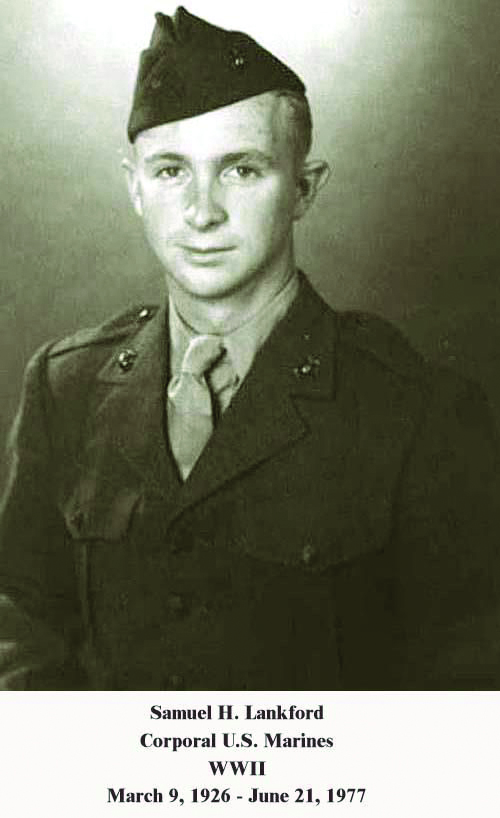 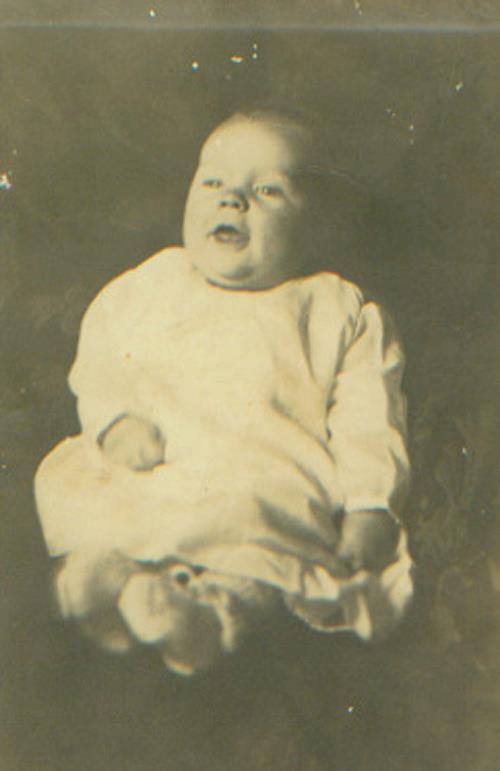 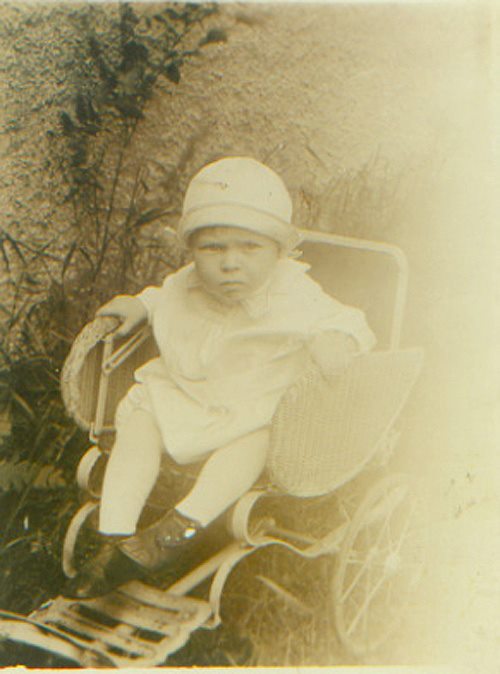 Sammie and his family moved to

Cricket, Wilkes County, when he was a toddler 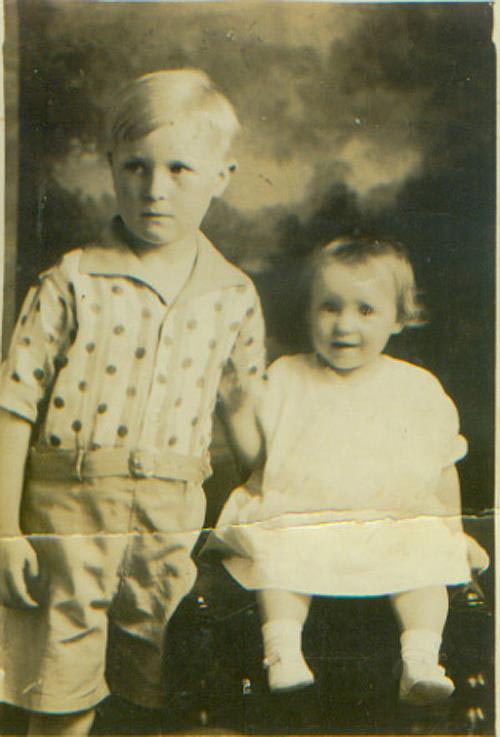 Young Sammie with his sister, Lovella 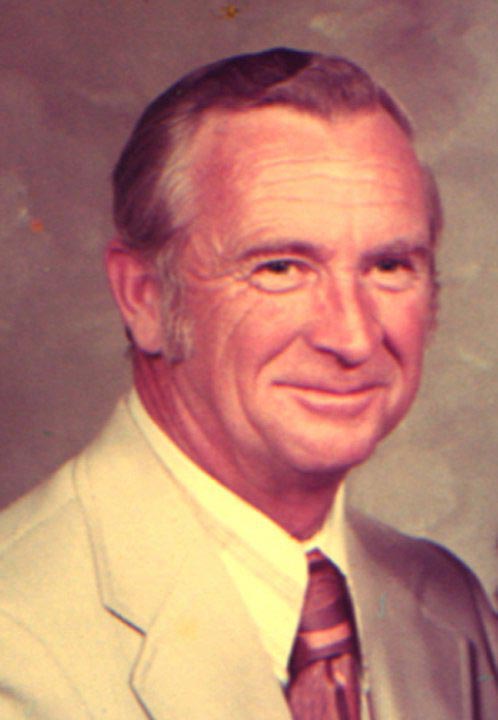 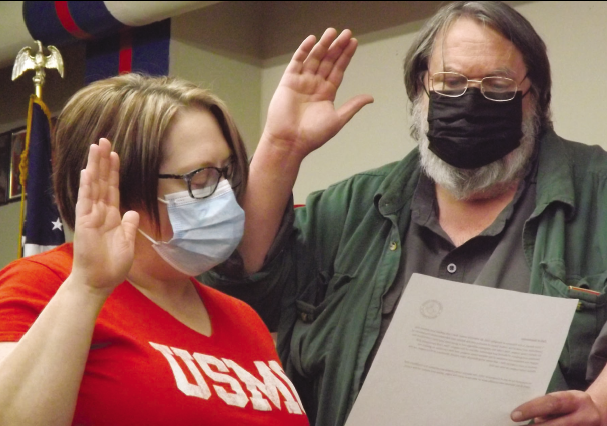 There is a bronze plaque in the cemetery of Arbor Grove United Methodist Church in Purlear which reads:

Samuel "Sammie" Hayden Lankford was my daddy. He died of cancer in the summer of 1977.

The memory of my daddy, particularly his time in service, has always been a great source of pride for me.

He was born in Moline, Ill., to a Wilkes County couple (Samuel and Mollie Lankford) who had moved there for work. He was their first child. The family later came back home to Cricket where Daddy went to school at Union. His father built houses and also ran a store on Suncrest Orchard Road.

Daddy was just 16 when he met my mother, the former Willa Mae McNeil.

My momma had four sisters. Daddy always said, “I married the prettiest of all those McNeil girls.”

Less than two years after their South Carolina wedding, Daddy joined the Marines Corps, went to Parris Island, S.C., for basic training, then California, then the Pacific and to war.

Daddy had volunteered. He said, “I knew that I’d be going, so I decided if I go, I’m going to make sure I went with the best.

I was just getting to know my father around the time he got sick. Before his ailment stuck, we would work on clearing an 11-acre tract of land we inherited from my maternal grandfather, Thomas McNeil. Loggers had been allowed to come in and cut much of the timber, so there was plenty of work to do. And, Daddy wanted a proper fence around the property - eight strands of barbed wire on locust fence posts.

The work was an every Saturday ordeal, and a lot of those weekends I would go with Daddy — out on this rough, hilly patch of land that he intended to tame.

Daddy used a blue Homelite chainsaw and a big orange Allis-Chalmers tractor for much of the work (both items which he seldom let me touch). My job was to stack wood. He cut big limbs into firewood-size pieces and I'd make a pile. And, then, another pile, until they were scattered like splintery, rosin-filled monuments to my adolescent efforts. There are still piles of wood on that land, long-rotted and forgotten, that never got used.

The work is not what attracted me to go with Daddy. It was a chance to hear his stories, particularly his tales about his time in the U.S. Marines during WWII. Sometimes on these Saturdays, Momma, would pack us bologna sandwiches so we wouldn't have to leave the woods. These were the best days, because of the increased chance I could get him to talk about the war.

As I mentioned, Daddy volunteered for the U.S. Marine Corps when he was 18 and was assigned to the Third Marine Division. He spent time on several Pacific Ocean islands. New Guinea, he said, was the wildest place on Earth. Guam, however, was the place he liked best.

He told about how he and his buddies would throw hand grenades into the water to kill fish, including sharks, to supplement their C-rations.

Daddy also told me about pulling a fellow Marine out of the water who was so riddled by Japanese machine gun bullets that my father thought he would never live. Turned out that man was an officer who later, after he recovered, hunted Daddy down to thank him for what he had done.

There was another story about Daddy driving along some jungle road and how four Japanese soldiers came out of nowhere with apparent intentions of taking his vehicle. By the time he emptied the 50-round magazine of his Thompson submachine gun, there was no one left to bother him.

Twice, Daddy had been promoted to sergeant. He had even served as a Marine Corp police officer for a short stint. But, one stunt or another — like the time he threw his metal helmet into the air and blasted it full of machine gun bullet holes — got him busted back down to corporal.

There were many questions that I asked, however, that went unanswered. The look in Daddy’s eyes told me to not pursue them any further.

He served as a corporal until the war's end. It was, and still is, hard to keep in mind that he was only 18 or 19 at the time he was in the service.

Although Japan surrendered in August 1945, the Marines' work in Asia wasn't done. Daddy was among those who were sent to China in an effort to thwart Communist-led forces.

Daddy brought back several souvenirs from China. Those included photographs depicting natives in the streets of what is now known as Beijing and some of the ancient architecture there. He also brought home a Chinese Nationalist flag. For years I thought he had captured that flag until later, when I better understood that era of history.

The grimmest reminders Daddy brought back from his time in China were two Communist bullets in his back. According to surgeons they were lodged too close to his right lung to be removed. When they came to give Daddy his Purple Heart, he plainly told them: “Stick it up your ass.”

I never quite understood why he did that. Regardless, he carried those two bullets in him the rest of his life.

After the war, Daddy worked at several different jobs. He was one of those types who could do nearly anything — build a house, a bridge, an engine…or whatever. Most of his later years were spent as a truck driver for the former L.M. Nelson Oil Company in North Wilkesboro. He hauled many loads to fill the fuel tanks of the equipment used to build W. Kerr Scott Dam & Reservoir.

It didn’t matter where he worked or went, or what he did, Daddy was a Marine for life — hardworking, stern in the face of opposition, always ready to meet any challenge head-on.

And, I am proud to say, that the name, Sammie, is still said many times each day inside our old home place in Millers Creek – a house which my father built. My first-born grandson, Samuel “Sammie” Osborne, is named after my father and now resides there with my daughter, Jennifer, and her husband, Edwin, whose father, Dean Osborne, was also a Marine.

Marine blood runs as red as the Marine Corps flag in that old house. U.S. Marine Corps heritage is part of our family. It always will be.