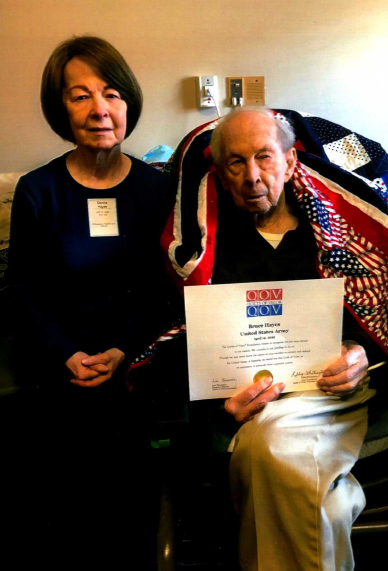 Bruce with his daughter, Donna, at a ceremony

where he was awarded a Quilt of Valor 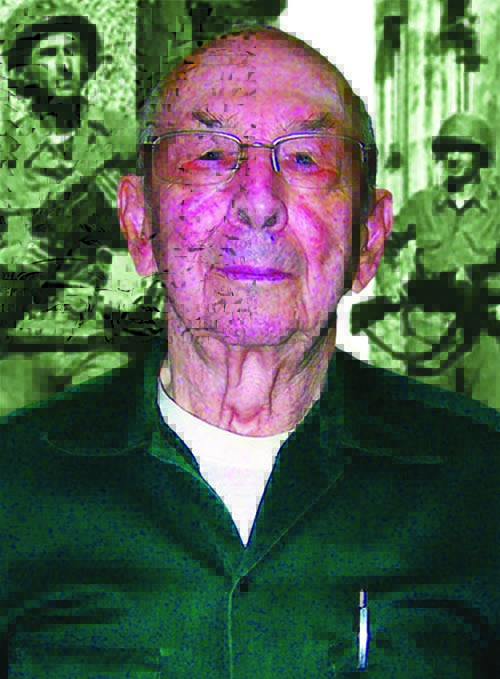 If you ask Bruce Hayes about his time in service, he doesn’t say much.

“There’s really not a whole lot to tell,” Hayes said.

According to his discharge papers, he apparently did plenty.

Members of his church, New Hope Baptist in Purlear, recently honored Hayes for his service and presented him with a shadow box, which he now proudly hangs in his home.

Hayes’ daughter, Donna, penned a brief biography of her father for the event. It tells how he was born on June 26, 1925, at his grandmother’s home in Purlear, off Parsonsville Road near his family church. He and his parents, Edgar Eugene Hayes, Sr., and Verta Alfre Watts, moved to North Wilkesboro when he was 6-months-old, his brother and two sisters were born in North Wilkesboro.

Hayes attended school at North Wilkesboro Elementary for five years until his family moved back to Purlear. He then went to Millers Creek School where he graduated in 1943. He was soon drafted into the Army in January 1944, and sent to Fort McClellan, Alabama.

“I was completing basic training about the time D Day happened,” Hayes said.

He came home and was there for his 19th birthday, then he was sent overseas. He spent a couple of months in a replacement depot in Italy and was then sent to Northern France. In France he was assigned to the 36th Infantry Division.

When asked what his job was once deployed, he answered. “I was an infantryman, a foot soldier, carrying my M-1.”

With the war still raging, Hayes was involved in several firefights with German troops.

“It’s no fun hearing bullets go by your head,” he said. “And, if they’re close enough you can hear the noise.”

The wound he was awarded the Purple Heart for came when shrapnel from a German grenade blast cut into his face.

Hayes remained in Germany until after the war and rose to the rank of sergeant. He shipped out of Bremerhaven, Germany, in March of 1946, returned to the United States and was discharged.

He came home and helped his uncle, Gwyn Church, dig wells. He then worked at Midway Pontiac in the Parts Department.

Hayes met his future wife, Olivia Irene Church at the Liberty Theater. They married on March 26th 1949. They bought a home in Millers Creek, where he still lives today. The couple had two children, a daughter, Donna Lee Hayes, and a son, Bruce Hayes, Jr.

In October 1954, Hayes was appointed as Rural Letter Carrier at the Millers Creek Post Office. He worked there for 31 years and four months before he retired in 1986. He didn’t work for a little over three years, then took a job as West Wilkes High School’s athletic custodian where he stayed until December 1997.

Looking further back, Hayes first joined VFW Post 1142 in 1947. He was elected quartermaster in 1955 and served in that position until September 1992. He became a life member of the post in 1961.

Hayes also served in the Millers Creek Fire Department in 1956, and served as secretary/treasurer for a number of years. He retired from the fire department in 1982.

Bruce Hamilton Hayes, Sr., age 97, of Millers Creek, passed away Saturday evening, July 30, 2022 at Atrium Health-Wake Forest Baptist-Wilkes Medical Center with family by his side. Bruce was born June 26, 1925 at the home of his maternal grandmother in Purlear, NC. He spent the first six years of his life in North Wilkesboro before the family moved to Purlear. In 1949, he married Olivia Irene Church. In August of 1950, they moved to Millers Creek, where he later served as a rural letter carrier for a little over 36 years-from October of 1954 through the end of January 1986. Prior to becoming a rural letter carrier, he helped drill wells for an uncle for about six months, and also worked in the Parts Department at Midway Pontiac. While still carrying the mail, he also held a part-time job for a period of time helping stock grocery store shelves with Keebler and Zesta products. And in April 1989, he began working part time at West Wilkes High School as Athletic Custodian through August of 1991, and again from September of 1992 through December 2, 1997.

In early 1957, Bruce was asked to join the Millers Creek Fire Department, which had been formed in 1956. In addition to being a firefighter, he served as Secretary-Treasurer for the Board of Directors for a number of years. He served in World War II from January 5, 1944 to March 25, 1946, seeing his share of combat as an M-1 rifle-toting infantryman. He spent a couple of months in a replacement depot in Italy and was then sent to Northern France, where he was assigned to the 36th Infantry Division. He spent time in France, Germany, and Austria during 1944 and 1945 in combat. The battles and campaigns he was involved in include Rome-Arno, Rhineland, and Central Europe. His decorations and citations include: WWII Victory Medal, European-African-Middle Eastern Service Medal, a Good Conduct Medal, Four Bronze Stars and a Purple Heart. Bruce joined VFW Post 1142 in 1947. In 1955, he was elected quartermaster and served in that position until September 1992. He became a life member of the post in 1961.

He is survived by his two children, Donna Lee Hayes and Bruce Hamilton Hayes, Jr; and a number of nieces and nephews.